SEOUL – The Ioniq 5 was a sea change EV. It offers more room inside than it should be capable of, more tech than its price tag suggests and comes to play with excellent efficiency and perhaps the best adjustable-on-the-fly regenerative brake levels available. Now there’s the 2023 Hyundai Ioniq 6, and despite the name (or number), it isn’t simply an expansion of the features that make the 5 the 5. It’s another expression of what’s possible with an electric powertrain and Hyundai’s E-GMP platform (also shared with the Kia EV6 and Genesis GV60), proving that you can take these building blocks and make a quirky-yet-practical crossover, or a sleek, gorgeous fastback sedan.

The expectations were high given my affection for the Ioniq 5, and honestly, the 6 didn’t quite impress in the same way. That isn’t to say the Ioniq 6 won’t have its fans. In fact, Hyundai representatives here in South Korea said that the 6 is both meant to be the aspirational model in the Ioniq lineup and that it will be priced below the 5 in the United States. For the record, the Ioniq 5 starts at $41,245 with a $1,295 destination charge, which brings up an interesting question: will a sub-$40,000 electric streamliner attract new buyers to either the Hyundai brand or electric vehicles in general?

Hyundai is certainly trying innovative ways to find customers with the Ioniq 6. The company’s new marketing direction includes things like virtual configurators and driving games, including ways to digitally interact with the Ioniq 6 in some corner of the Metaverse. The line between the actual, real-world Ioniq 6 and the digital version is blurred and getting blurrier when it comes to paid promotions. 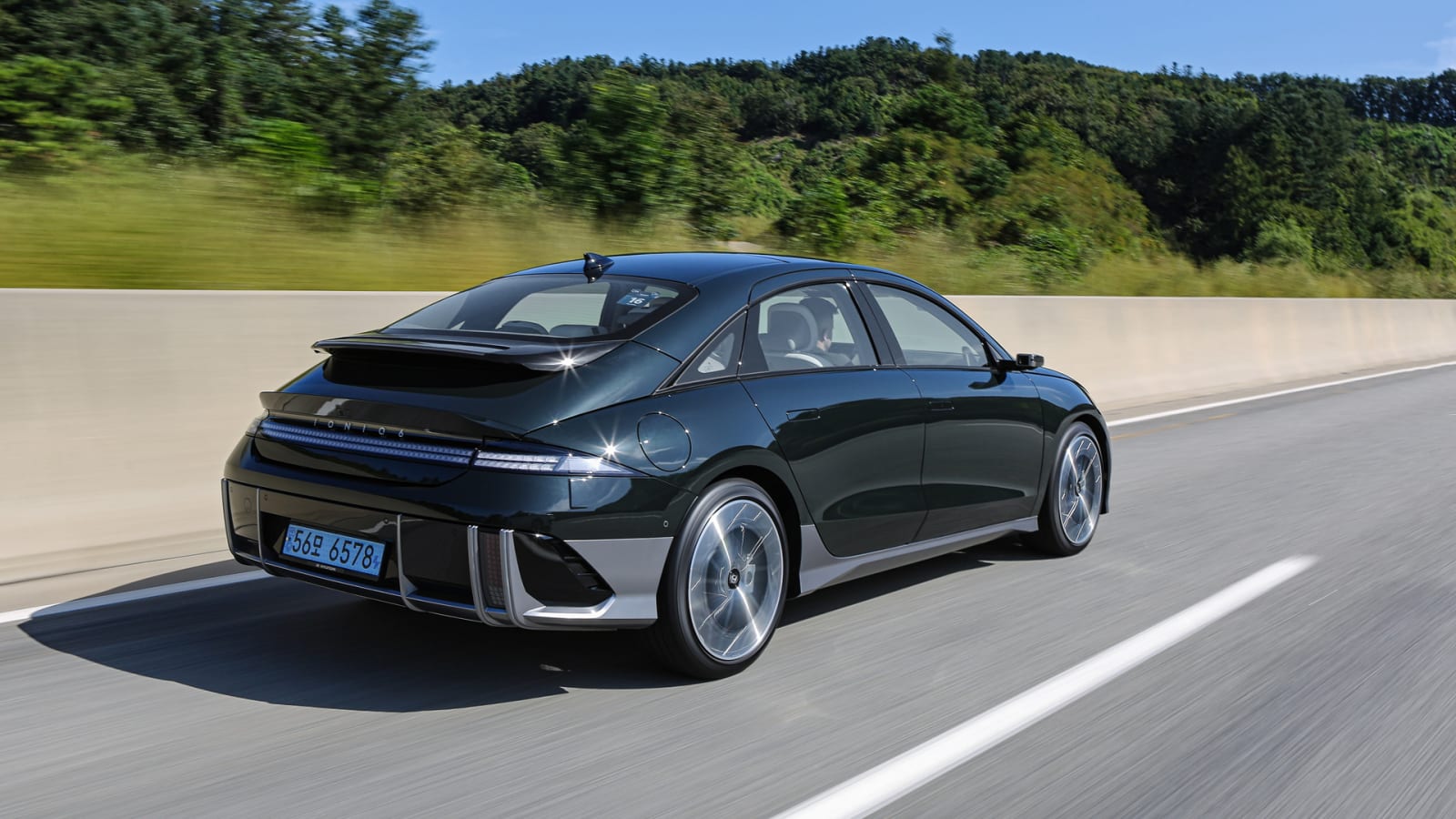 We prefer to answer our car questions IRL, but all of the Ioniq 6’s secrets could not be immediately pried open on South Korea’s public roads. Constant speed trap cameras were just one factor that kept our drive to reasonable speeds. At no point during our day of driving did we see any stretches of road with a speed limit above 100 kph (62 mph), for example, and we’re not keen on breaking driving laws in foreign countries. The good news (especially for EV drivers) is that a speed limit is not the same as an acceleration limit, so it’s not like we were evaluating a static model.

The Ioniq 6 is a fun car. Acceleration, as with any EV worth its salt, is excellent and reminiscent of the Ioniq 5 (though obviously depends on the motor/battery combo you get, more on that below). In Sport mode, the system kept noticeably torquing the steering wheel to keep the front wheels balanced and pointed straight ahead. In the more relaxed Eco mode, the steering feel lightened, but you always felt the heavy battery mounted under the seats. It is an EV, after all.

Thanks to their shared platform and identical power output on some trims, the fact that the Ioniq 5 and 6 offer similar driving characteristics should not have been a surprise. But somehow it was. The Ioniq 6 looks faster and it’s not like the 6 is lazy when it comes to acceleration (it can still hit 60 mph in about 5 seconds with the dual-motor powertrain). Still, you notice the lack of grab-hold-of-something acceleration more in a car that has a performance vibe like the Ioniq 6 than you do in an SUV-ish thing like the 5.

The Ioniq 6 certainly has the potential to capture the imagination of new drivers thanks to its throwback fastback style, like a zero-emission Mercedes-Benz CLA for the masses. The wheelbase is a bit shorter than the 5 (116.1 inches compared to 118.1), but that’s still awfully long, and there is plenty of rear legroom. Naturally, given the body style, there is not as much rear headroom in the 6, nor as much cargo space. 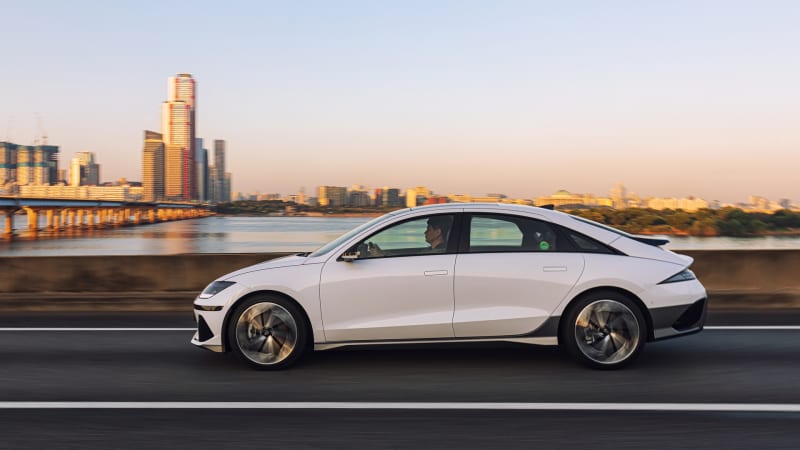 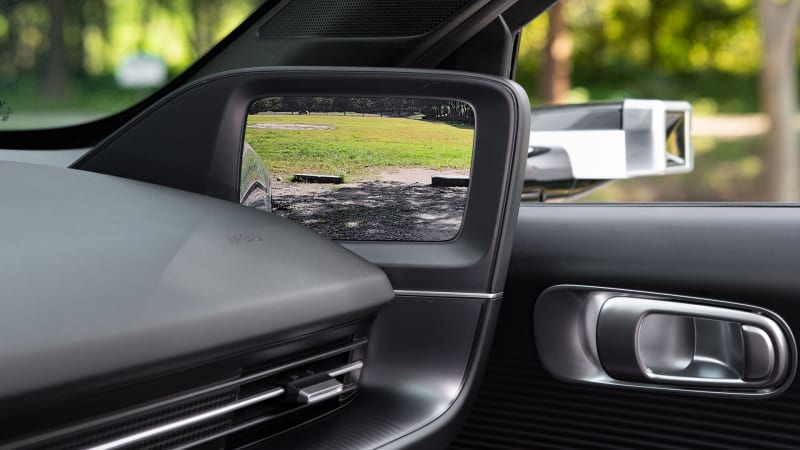 Since the Ioniq 6 won’t start production until December and won’t go on sale in the United States until sometime next year, we were treated to prototype Korean-spec models for our drive. Our test car was a Long Range AWD model and had digital side cameras instead of the traditional mirrors that we’ll get in the United States. Amazingly, it did not take too many miles to get used to the digital “mirrors,” and hopefully, this technology will be approved here soon. Active air flaps in the grille, a rear spoiler located high up the EV’s backside and aero wheels are just some of the ways the designers made the Ioniq 6 as slippery as possible, ending up with a drag coefficient of just 0.21. That’s not quite Mercedes EQS or Tesla Model S territory, but it’s close.

The Ioniq 6’s aerodynamic efficiency helped us average 3.85 miles per kWh over our 136-mile drive, alternating through Eco, Normal and Sport modes and adjusting regenerative brake levels depending on the situation. As stated, these miles were your average, normal, standard, regular miles, the kind most people will drive every day. That means our average energy usage should be what you can expect in the real world. But we should not slip too quickly past that efficiency number. Getting 3.85 miles per kWh means that the energy cost to go 100 miles is just under 26 kWh. Only three other production EVs for sale in the United States can claim that kind of efficiency, according to the EPA: the Tesla Model 3, the Lucid Air and the original Hyundai Ioniq Electric. With better efficiency than the Ioniq 5, but with the same batteries as the Ioniq 5, it stands to reason that the 6 will achieve a longer range than the Ioniq 5. Just how much is still to be determined and announced.

The choice of powertrain and battery options is shared with the Ioniq 5, with one exception. That would be the Standard trim, which has the same 53-kWh battery as the comparable 5, but lower system voltage results in a 148-horsepower motor rather than 168. Everything with the 77.4-kWh Long Range battery pack is copy and paste. The single motor version sends 225 horsepower and 258 pound-feet of torque to the rear wheels. A second motor added to the front axle creates the optional all-wheel-drive model, and ups performance to 320 hp and 446 lb-ft. 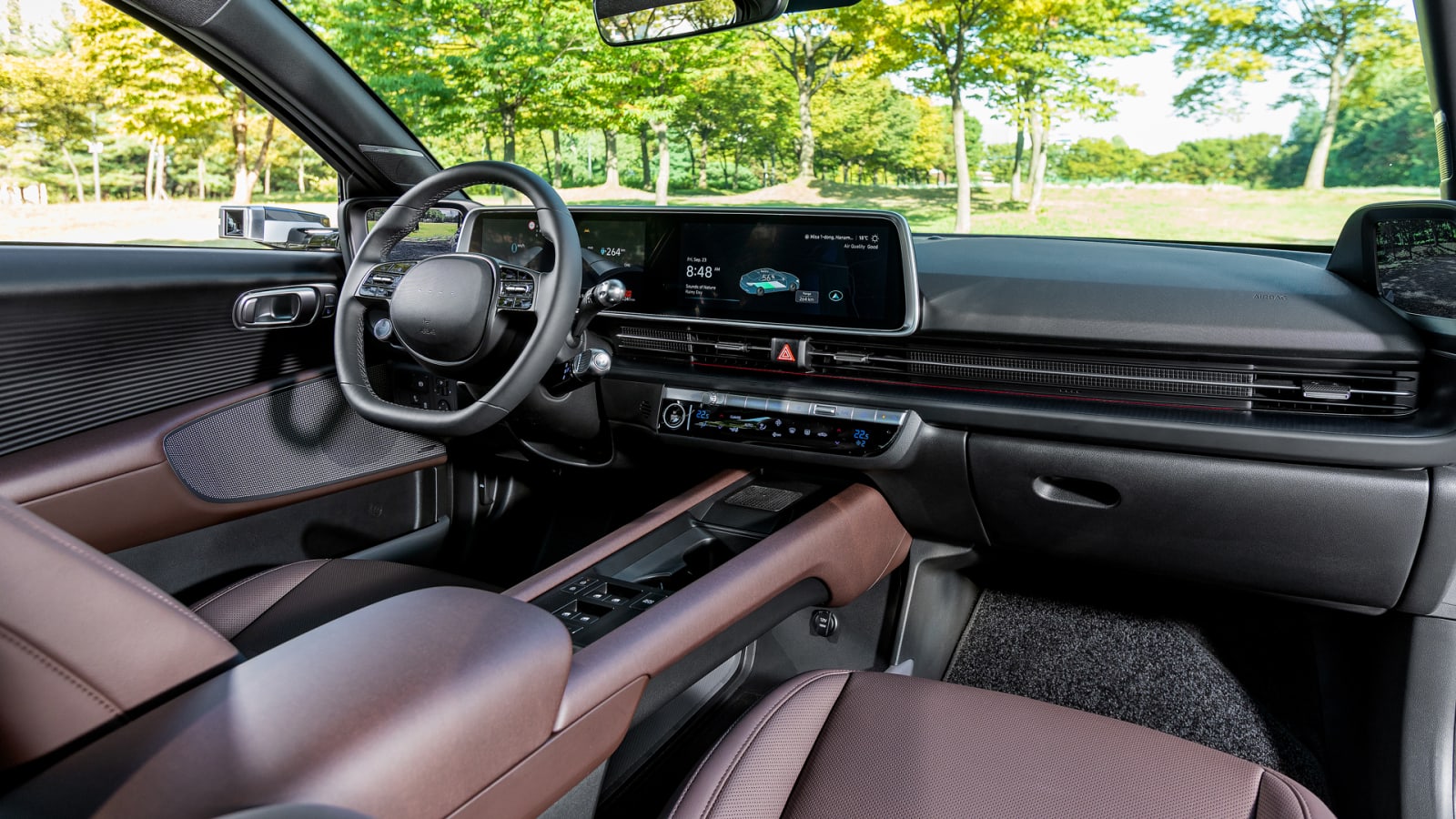 There are other differences with the Ioniq 5 and they represent improvements. The 6’s multi-charge technology allows the car to take advantage of the latest DC fast chargers — up to 350 kW — at either 400 or 800 volts to refill the battery from 10 to 80 percent full in just 18 minutes. A new battery conditioning system will make this kind of experience more reliable. If you’ve plugged a DC fast charger into the nav system, the car will use some of the battery’s energy to make sure the pack is at the correct temperature to ensure it can take advantage of that much direct current, even if it’s extremely hot or cold outside. Some Ioniq 5 models will get this battery preconditioning technology for 2023. The 6 will also offer a vehicle-to-load (V2L) bi-directional charging power outlet, like the 5.

There’s a minimalist ethos to the whole cabin experience. Forward visibility can’t be beaten, given that the front-end slopes down so sharply that you might as well be driving a car with no hood. Rear visibility is amazing. The clean and spacious cabin might feel simplified, but there’s a lot happening behind the screens, including the ability to customize the two-tone cabin lighting to match pretty much any mood.

Safety features in the Ioniq 6 provide strong nannying capabilities if that’s your thing. Our Korean-spec tester used a nav system that knew where every speed bump in the country was located, and it told us all about them. Lane-keeping assist can also feel overwhelming at times, but you can turn it off with a long press of a button on the steering wheel. Improvements to the safety and convenience features include better lane-centering steering assistance for the Highway Driving Assist 2 adaptive cruise control system and an updated Remote Smart Parking Assist 2 system that can park the car in parking lots with painted lines that are perpendicular, parallel or diagonal.

Hyundai has potential here, if it keeps the price reasonable. The Ioniq 6 is fun, but not too much fun. In the end, the Ioniq 6 is a great Hyundai EV, but it’s not the game-changer that the Ioniq 5 was. Despite all the wonderful touches Hyundai put into the Ioniq 6, I’d personally stick with the 5. At least until a wished-for Ioniq 6 N blows my socks off someday.