Pros: Just-right sizing for a lot of drivers; costs less than the EQS; comfort and quality at the forefront

Cons: Technology can be overwhelming; visibility isn’t great; too many touch-sensitive controls

Arriving late in 2022, the 2023 Mercedes-Benz EQE electric sedan is essentially a little brother to the full-size EQS in every way. It’s a little smaller than the EQS, while still being larger inside than the gas-powered E-Class. We don’t have pricing for the EQE models as of this writing, but we expect it to start in the $70,000 range, considerably less than the EQS’ $103,360 (including destination) cost of entry.

If you’re familiar with the EQS, though, the EQE will feel immediately familiar to the point of being indistinguishable. The design is similar, inside and out. That includes the available, dash-dominating Hyperscreen. Really, you’d be forgiven in you have trouble telling the two sedans apart until you sit in the back seat and notice the legroom is merely ample rather than excessive. The EQE also has a traditional trunk instead of the hatchback-esque rear door of the EQS. Finally, because of the EQE’s shorter wheelbase, it trades that aforementioned bit of rear legroom for increased maneuverability.

In case you’re wondering how the EQE lines up to that electric car elephant in the room, Tesla, the EQE falls closer to the Model S in terms of size, but fills the price gap between the Model 3 and Model S. And while Tesla gets away with minimalist design inside its cars, Mercedes customers expect content and ambiance galore, and they get it.

The 2023 Mercedes-Benz EQE is an all-new model. 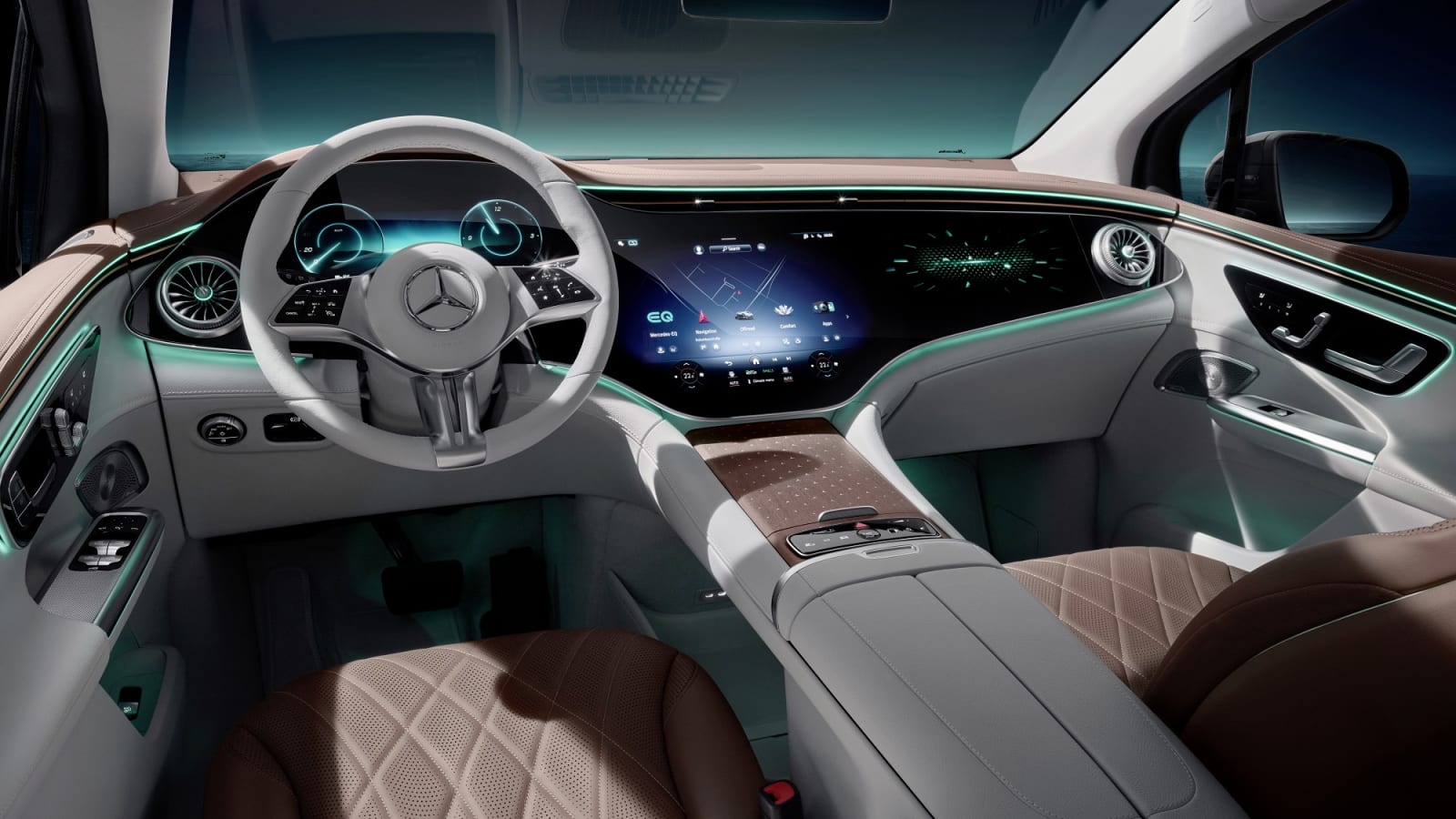 What are the EQE’s interior and in-car technology like?

The EQE feels roomy and cozy. The seats are comfortable, and feature rich synthetic leatherette or authentic leather. Heated front seats are standard; ventilated and massaging seats are available. There are a number of trim options, including wood or laser-etched plastics, and everything you touch feels substantial. Ambient lighting throughout the cabin helps create more ambiance as the sun goes down, and there are a variety of color schemes from which to choose. You can also customize your own multi-color lighting landscape.

Whether or not your EQE has the optional “Hyperscreen” that covers the whole dash with three displays in one contiguous glass panel, it will have a digital instrument panel and a large, central infotainment screen (the base screen is the same portrait-oriented one you’ll find in an S-Class, so you’re not exactly slumming it). With either system, it’s easy to find Mercedes tech daunting, and it will take some time to get used to. But once you do, you’ll have a wealth of information and customization at your fingertips. The MBUX system will bring relevant functions — like displaying your next turn — to the foreground automatically, and voice recognition can further help you to have to dig through menus. Saying “Hey Mercedes” activates voice control, but don’t be surprised if the voice assistant chimes in whenever you discuss the brand in the car. An optional head-up display employs augmented reality to do things like highlight the car in front of you when using adaptive cruise control, or projecting arrows overlaying the road to point out your next turn when navigating.

The EQE also features a fingerprint scanner that can activate your customized driver profile. You can register up to seven profiles per vehicle. 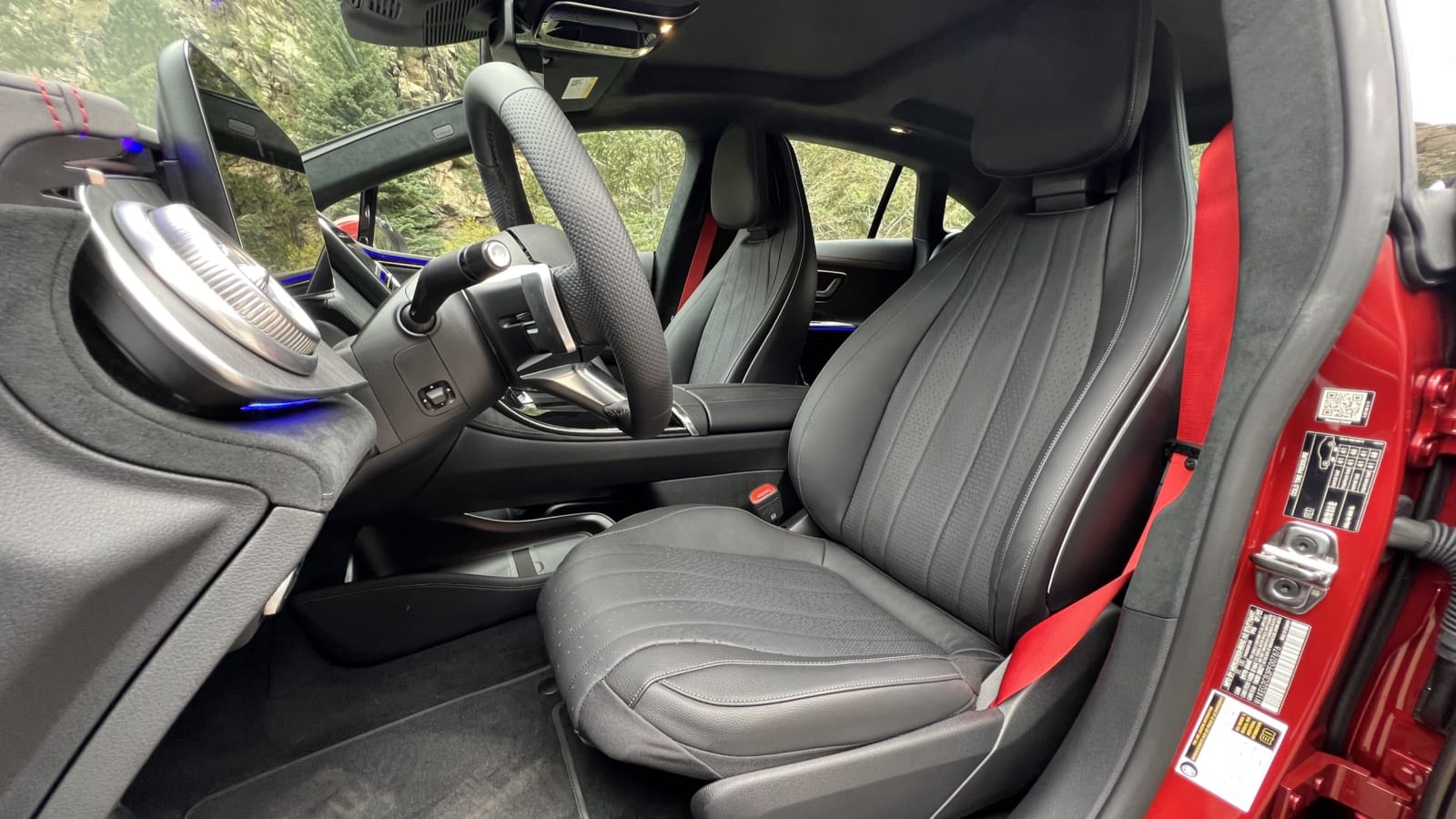 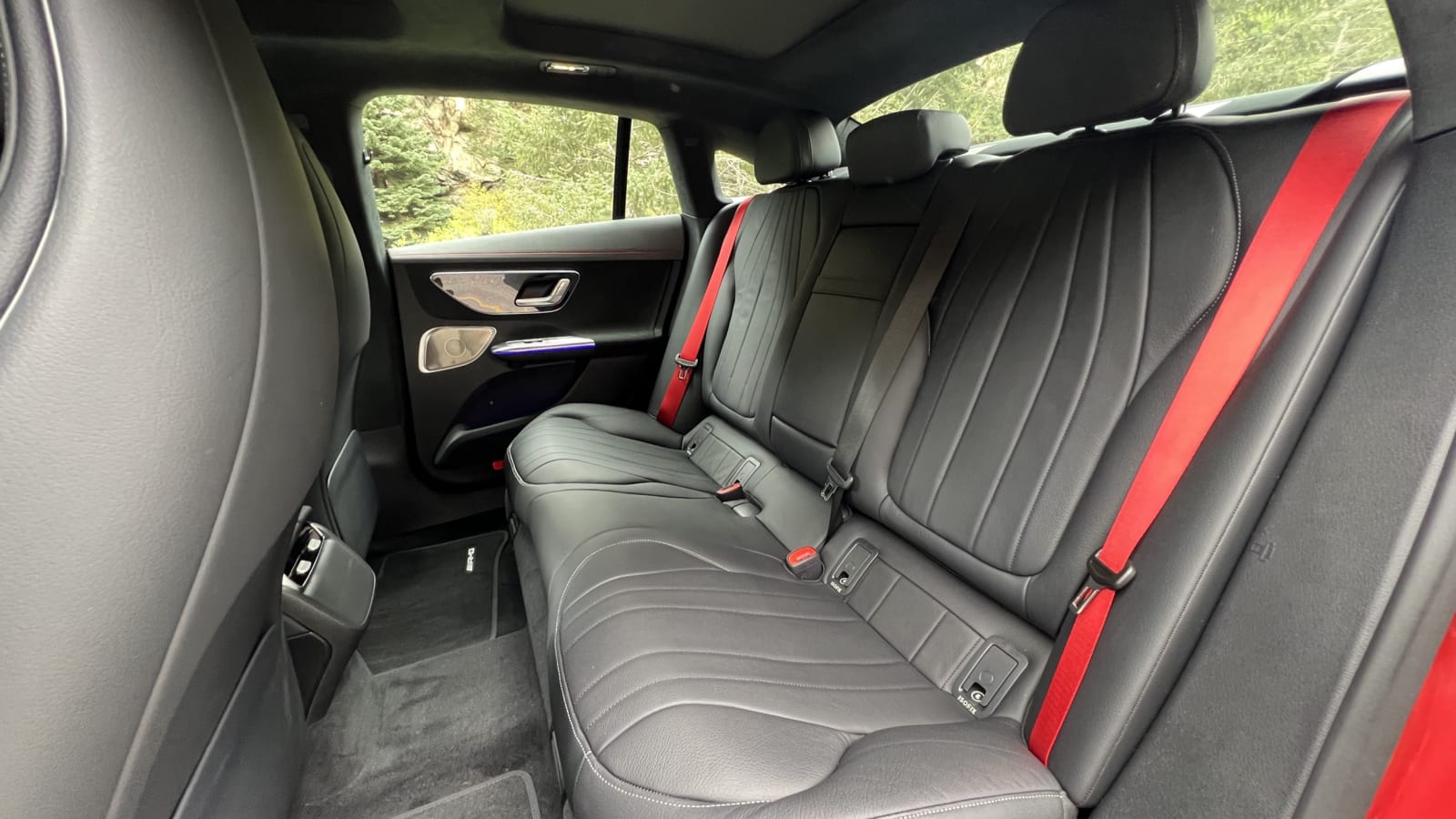 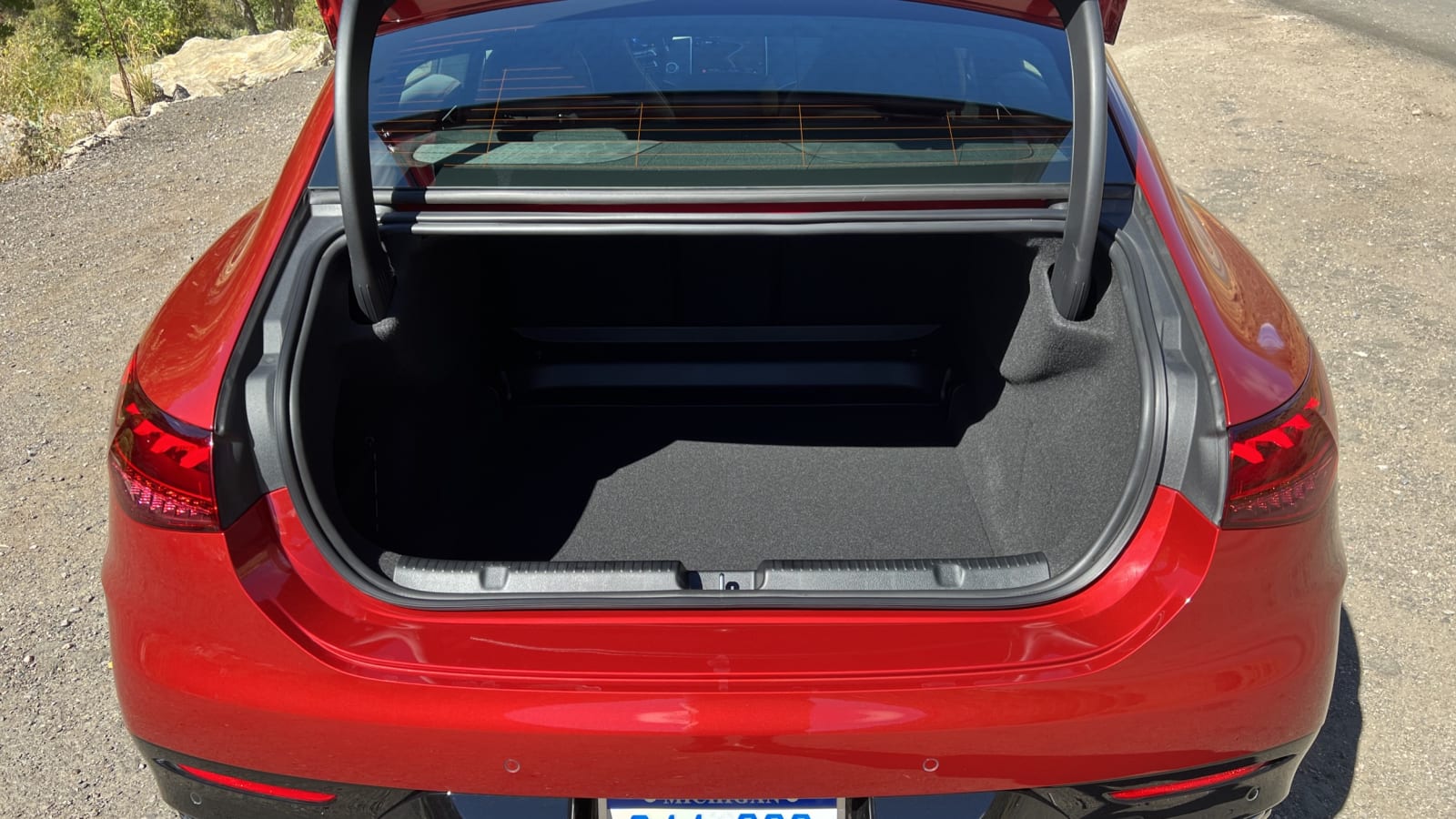 How big is the EQE?

At 196.6 inches in length with a 122.8-inch wheelbase, the EQE is basically a shorter copy of the EQS (by 10.7 inches overall, and 3.6 inches between the axles). Despite being smaller, there’s plenty of legroom in the EQE, just not with acres to spare like in the EQS. Most passengers won’t have complaints about headroom, especially with the airy feel the sunroof affords the cabin, though some taller passengers might find their heads a little closer to the roof than they’d like.

Unlike the EQS, whose whole rear hatch — glass included — raises up when opened, the EQE Sedan has a more traditional trunk. At 15 cubic feet, it’s about average for a luxury midsize sedan, but about 7 cubic feet smaller than the EQS’ cargo area and about 5 cubes smaller than the trunk in a Tesla Model 3.

What are the EQE’s fuel economy and performance specs?

The EQE will offer four different powertrains. The EQE 350+ is the base car, with a single motor powering the rear wheels. That motor provides 288 horsepower and 391 pound-feet of torque. Mercedes says it’ll do 0-60 mph in 6.2 seconds. That might sound slow when compared to the ludicrous bar set by electric luxury cars (pun intended), but it really isn’t. Driving range and fuel efficiency haven’t been announced yet for the U.S., but its 90.6-kilowatt-hour battery pack should provide in excess of 300 miles on a charge, and is capable of 170-kW DC fast charging.

Mercedes says a 350 4Matic is coming this year, which will be the entry version with all-wheel drive courtesy of a motor added for the front axle. The two motors produce the same 288 hp as the 350+, but boost torque up to 564 lb-ft. It’s just slightly quicker, doing 0-60 in 6.0 seconds

Moving up to the EQE 500 4Matic, this spicier all-wheel-drive variant’s dual motors provide a total of 402 hp and 633 lb-ft of torque. This extra oomph reduces the 0-60 time to 4.5 seconds. We don’t know yet what the extra power means for range from the 90.6-kWh battery, but it will certainly sacrifice some range.

The line-topping EQE Sedan will be called the Mercedes-AMG EQE, with a pair of beefier motors providing 617 hp and 701 lb-ft of torque, though a “Race Start” function will temporarily unleash a total of 677 hp and 738 lb-ft. The AMG EQE will do 0-60 in 3.4 seconds, which shrinks to 3.2 seconds with Race Start activated. Again, range is TBD. 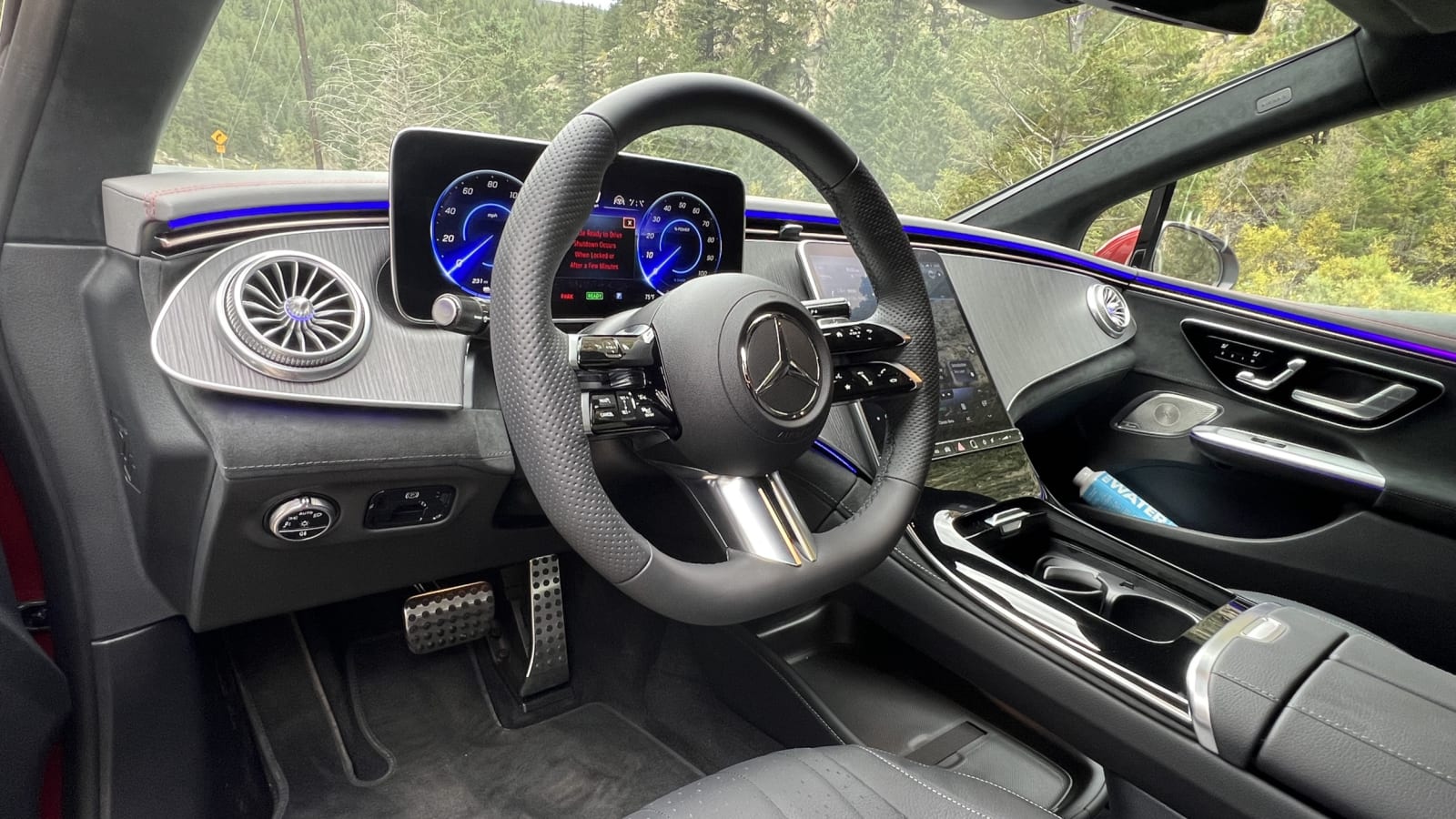 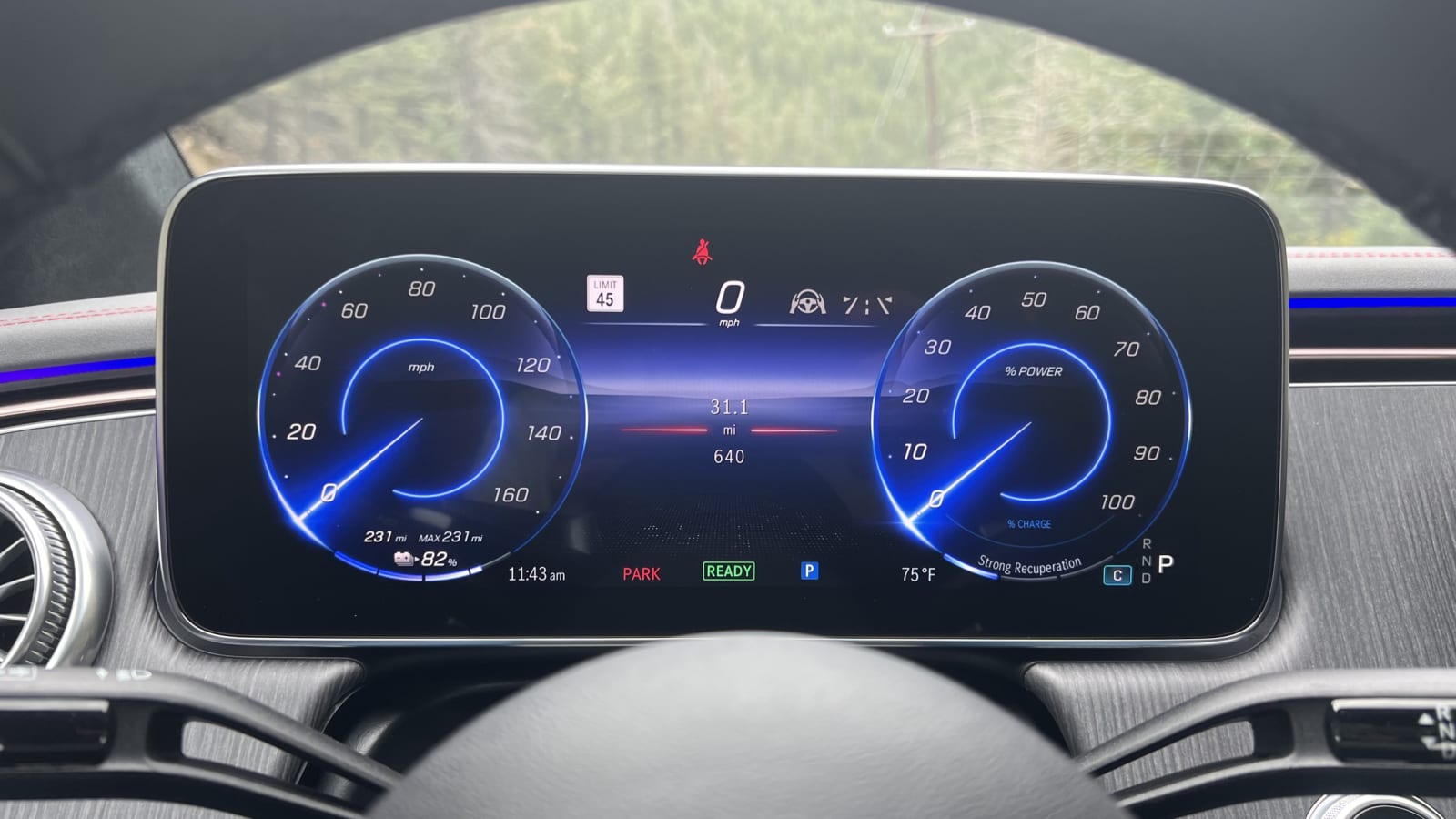 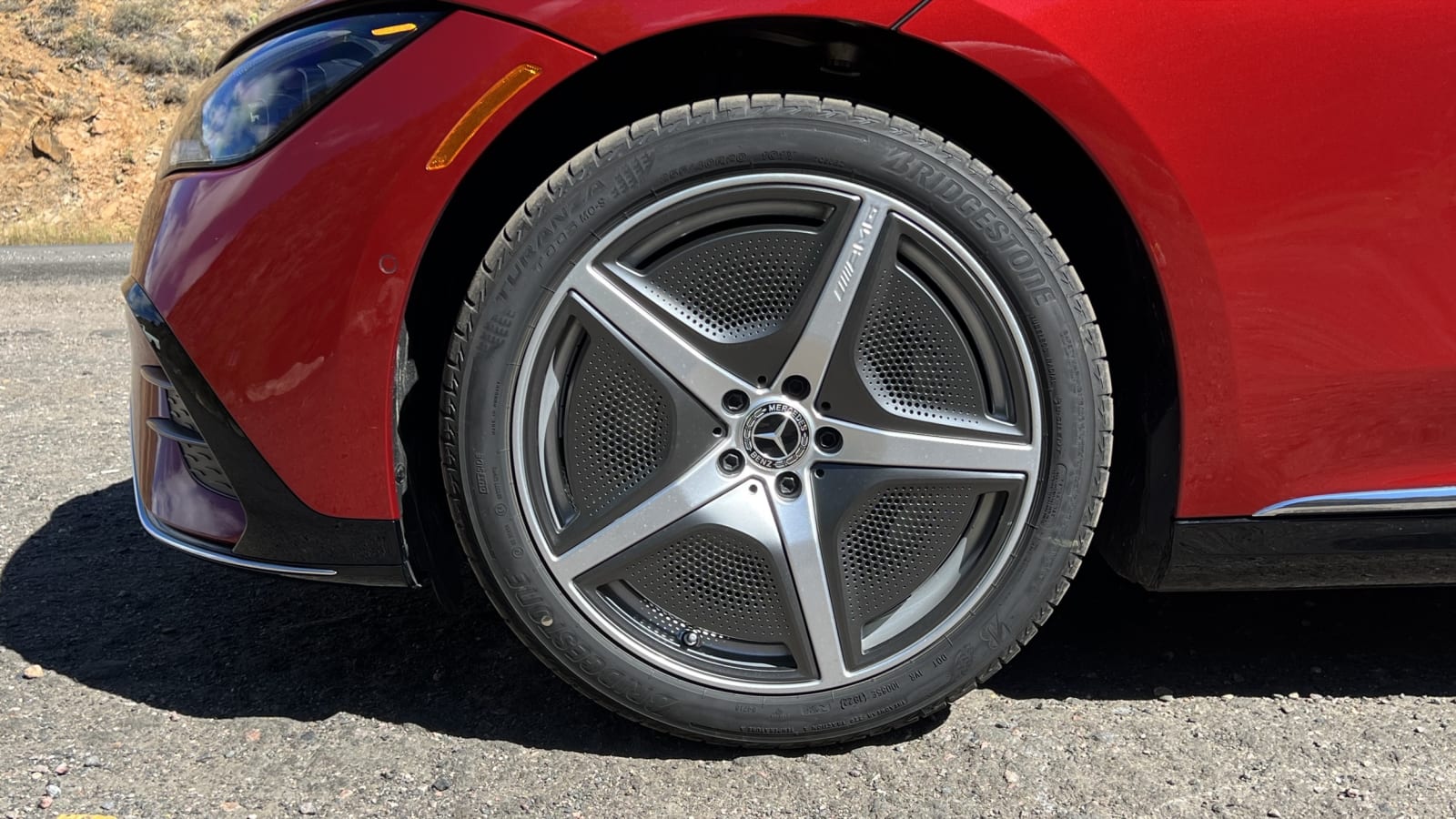 As of this writing, we’ve only driven the EQE 350+ and the EQE 500 4Matic. Starting with that base model, you’ll find acceleration that’s effortlessly quick, quiet and smooth. It’s not powerful enough to get your guts a-twirlin’, but 288 hp and 391 lb-ft of torque is plenty to feel fast in the city and keep up with faster-flowing traffic on the highway. The 500 4Matic’s 402 horsepower makes for faster starts, as well as increased motivation at higher speeds for quick passing maneuvers.

Other than the powertrains, the non-AMG EQE models feel the same to drive. Both can be had with an air suspension to further improve the ride and let the chassis adapt its behavior based on your selected drive mode, though a tad more noise and motion can be sensed within the EQE. Both can also be equipped with rear-wheel steering (up to 10 degrees), which makes for smoother high-speed lane changes and exceptional maneuverability in tight parking lots. They have three selectable levels of regenerative braking, plus an automatic mode that will help maximize your range while helping to keep your distance when coasting behind another vehicle. The strongest regeneration setting creates some strange brake pedal behavior, with the pedal moving even when you don’t move it, and it won’t necessarily be where it was when your foot left it. We didn’t notice that problem in the other regen modes, though. The EQE also suffers from limited visibility, with a not-very-tall rear window and a high, expansive dashboard. 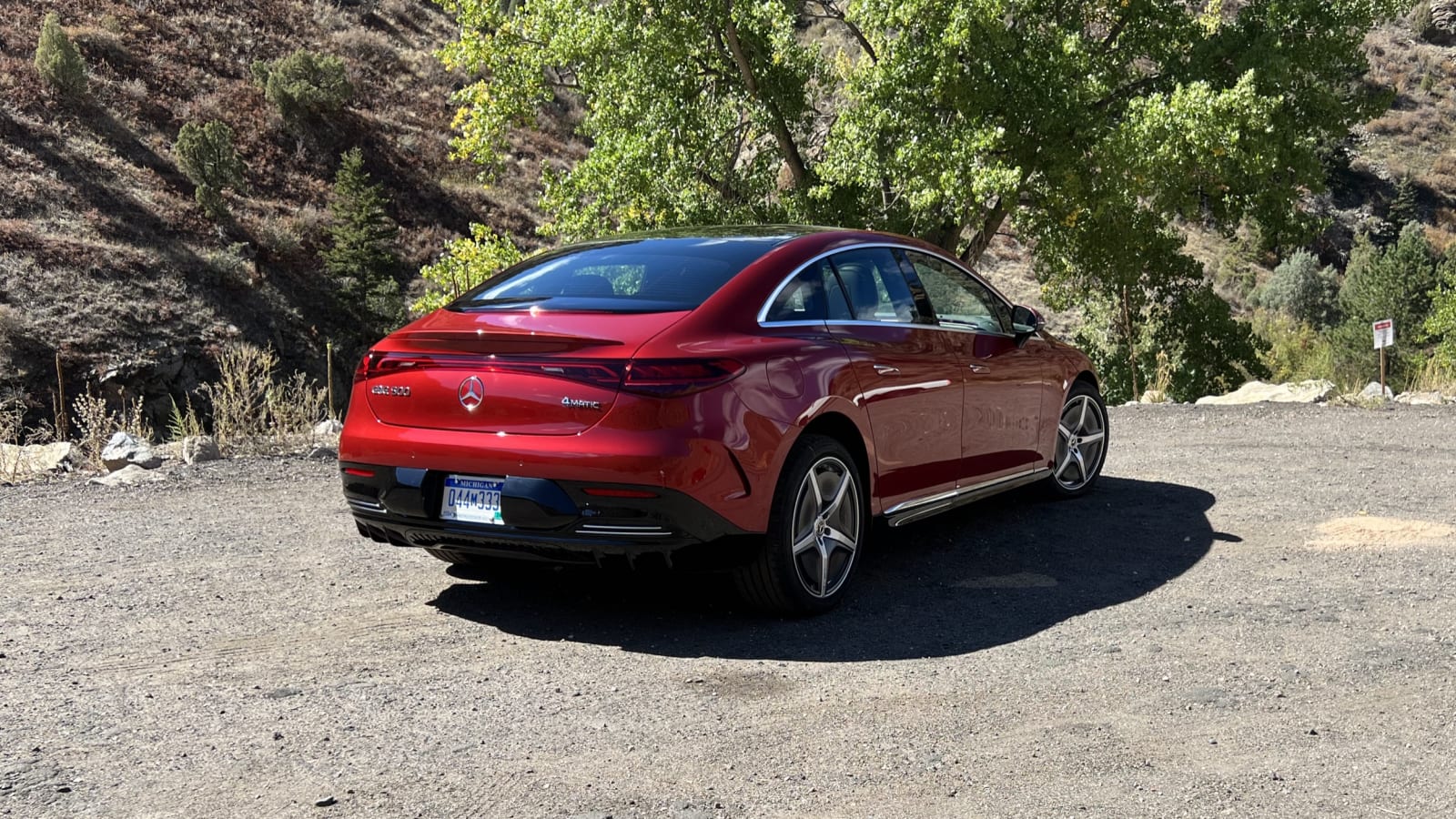 What other Mercedes-Benz EQE reviews can I read?

Our first drive in the Mercedes EQE Sedan, specifically the 350+ model, which is the base powertrain for the U.S. We found it to be effortlessly quick and quiet, and we can’t help but draw comparisons to the larger EQS. 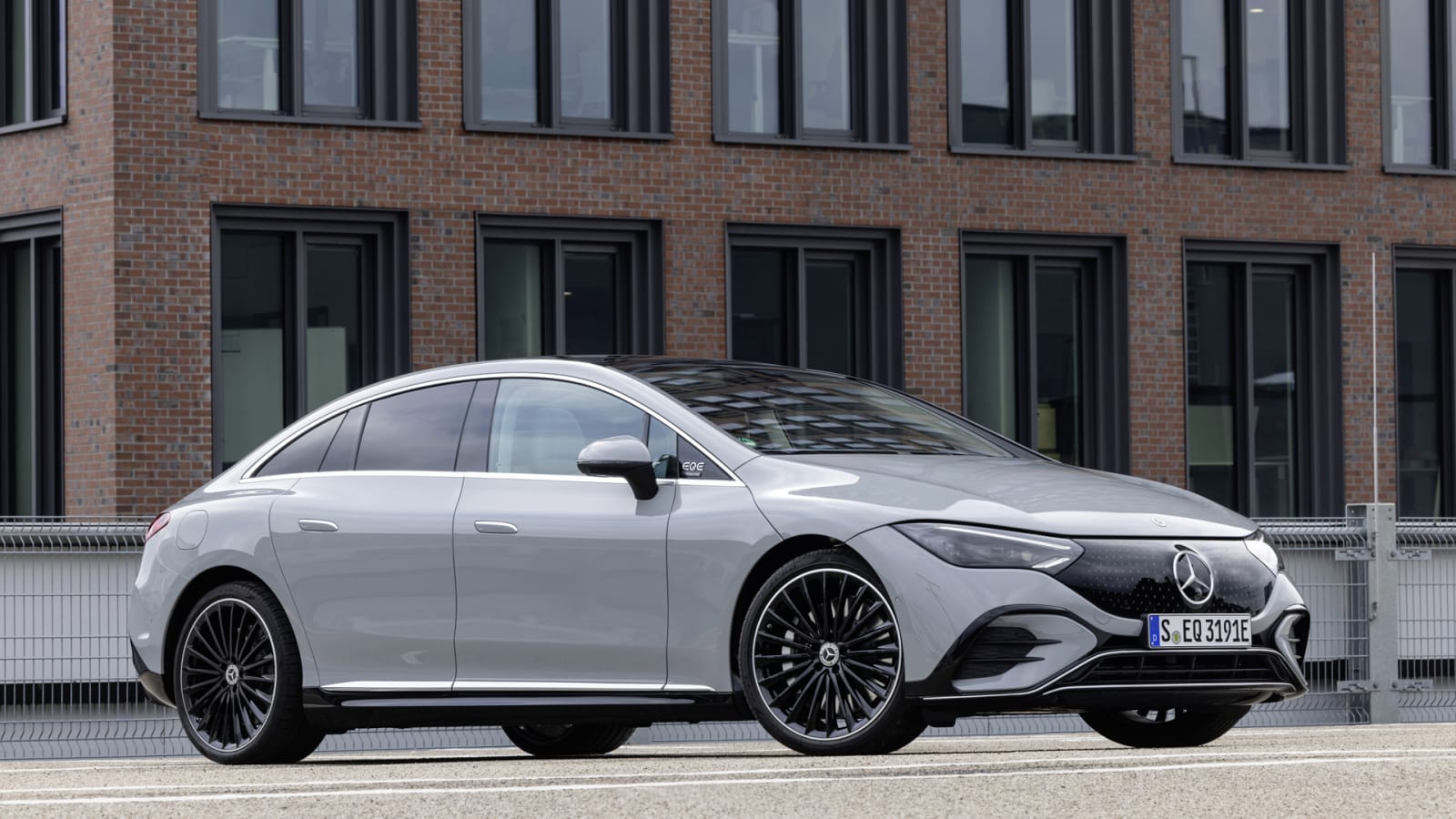 Our first taste of the electric sedan, from the passenger seat, where we can appreciate its quiet, comfortable ride.

Mercedes-Benz hasn’t announced pricing for the 2023 EQE as of this writing, but we expect it to start in the $70,000 range, and for well-optioned examples to easily exceed $100,000. It is expected to go on sale by the end of the year

What are the EQE’s safety ratings and driver assistance features?

The EQE hasn’t yet been evaluated by third parties like NHTSA or the IIHS.