The 2023 Nissan Pathfinder may possess one of the oldest SUV nameplates, but the actual vehicle itself has oscillated wildly over the years between body-on-frame and unibody (crossover) architecture. It’s grown in size and seat number. It’s been a vehicle actually capable of finding paths and one that’s better suited to using very-paved paths already found. With the latest generation introduced last year, the Pathfinder maintains its architecture and seat count from one generation to the next for the first time.

It’s still a seven-passenger crossover of the well-paved path variety, but at least the addition of the Rock Creek Edition for 2023 lets the Pathfinder go back to its roots a little bit. Last year’s redesign had already started in that direction stylistically thanks to its bolder, more chiseled appearance. Yet ultimately, the Pathfinder is a family hauler, and for that purpose, it impresses with a modern interior that boasts above-average materials quality and easy-to-use controls. Space is obviously plentiful as a three-row crossover, though it’s merely average for the segment. The driving experience also does nothing to stand out from the pack, but at least it doesn’t repel as the previous generation did.

In total, the 2023 Pathfinder is more aligned in spirit to its old-school predecessors, while being even more family-friendly than its homely immediate predecessor. The new Pathfinder Rock Creek Edition also adds some character and a modicum of rugged capability that should certainly be welcome. The Pathfinder even offers more towing capacity than most three-row crossovers. We’d still choose a Kia Telluride, Hyundai Palisade, Toyota Highlander Hybrid or Jeep Grand Cherokee L first, but among the second tier of alternatives, the Pathfinder is right up there.

The Pathfinder Rock Creek Edition returns for 2023 and we review it here. Pictured above, it’s the most rugged Pathfinder trim level with a modest, 0.6-inch ground clearance lift to 7.7 inches, an off-road-tuned suspension, beadlock-looking 18-inch wheels, Toyo Open Country all-terrain tires, lots of matte black body cladding, and a platform-style roof rack. Oh, and lots and lots of Rock Creek badges. Elsewhere in the lineup, the SL gains a standard wireless charging pad, while the SL and Platinum gain a standard 10-way power passenger seat. The Platinum is now offered with a Platinum Captain’s Chairs package that includes a removable second-row console between the captain’s chairs. 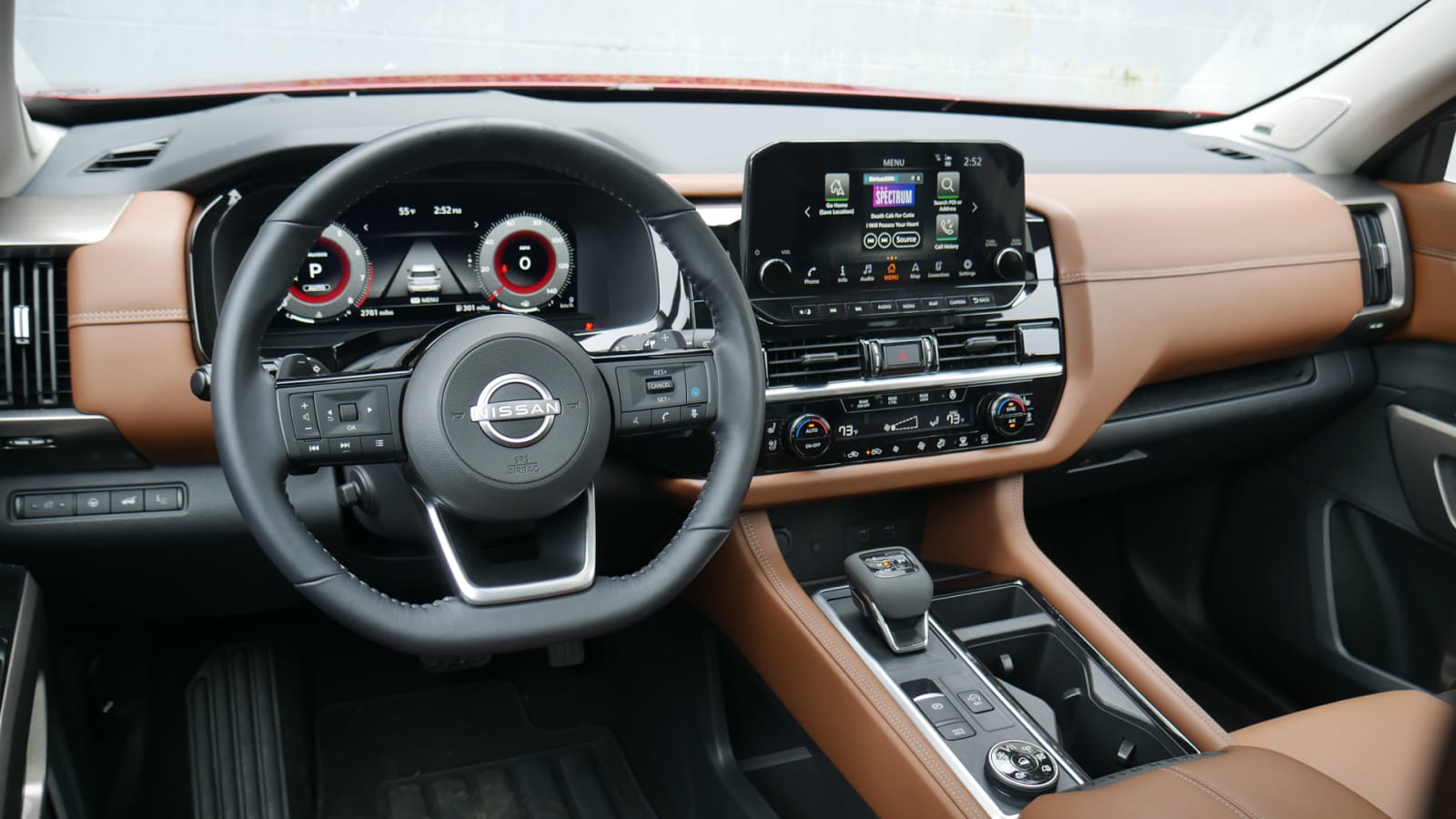 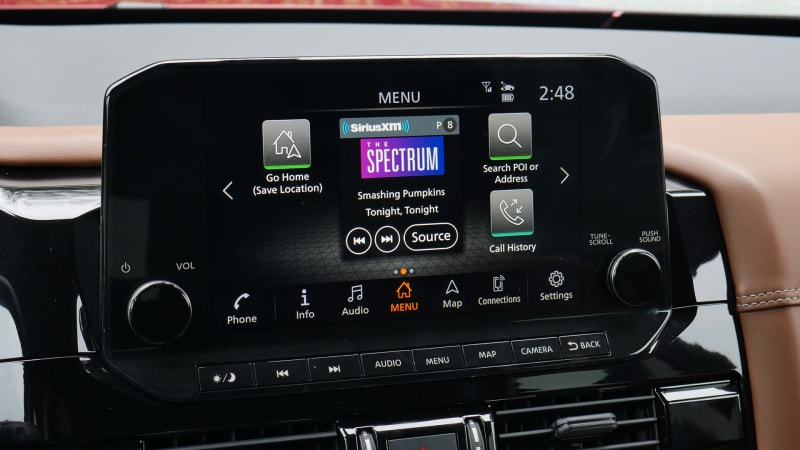 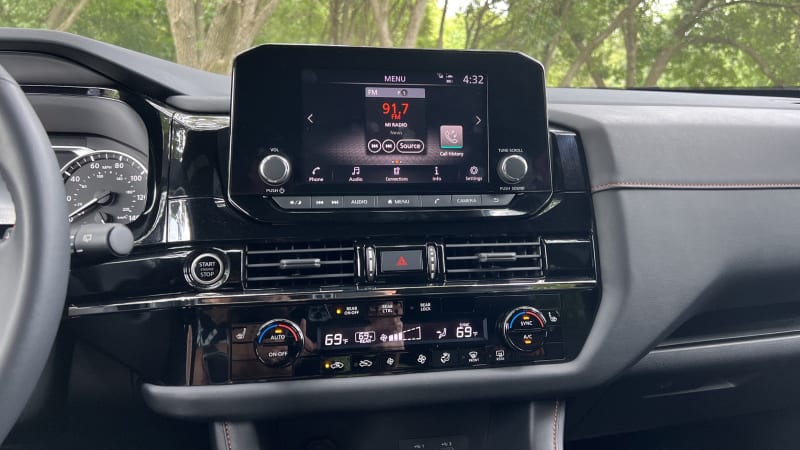 What are the Pathfinder interior and in-car technology like?

This is arguably the Pathfinder’s best attribute. Although the range-topping Platinum trim level you see up there is its best foot forward, complete with handsome two-tone leather/pleather all over the place, even lower trim levels benefit from the same handsome design, thoughtful storage and user-friendly technology. General materials quality is average for the segment, which speaks to how good the segment is.

The center console features a vast pad to charge your smartphone, be it wired or wireless on upper trims, plus a smaller bin to prop up your phone should you prefer. The cupholders are big and versatile, the under-armrest and door bins are large, and there’s bonus storage under the console. You can also get a removable center console in between the available second-row captain’s chairs.

The 9-inch touchscreen shown above bottom left is standard on the SL and Platinum trim levels, and features a user interface that really nails a sweet spot of aesthetics and functionality. There are hard buttons and knobs, plus a stationary row of on-screen menu icons, which are always appreciated. The display itself is high resolution and features vibrant colors with attractive, legible graphics. It may not be ultra-wide (as in the Palisade and Telluride) or tall (Explorer), but it’s big enough, easy to see and works well. The 8-inch screen found in the S, SV and Rock Creek trims (above bottom right) has fewer features to control and obviously is smaller, but its functionality is essentially the same. 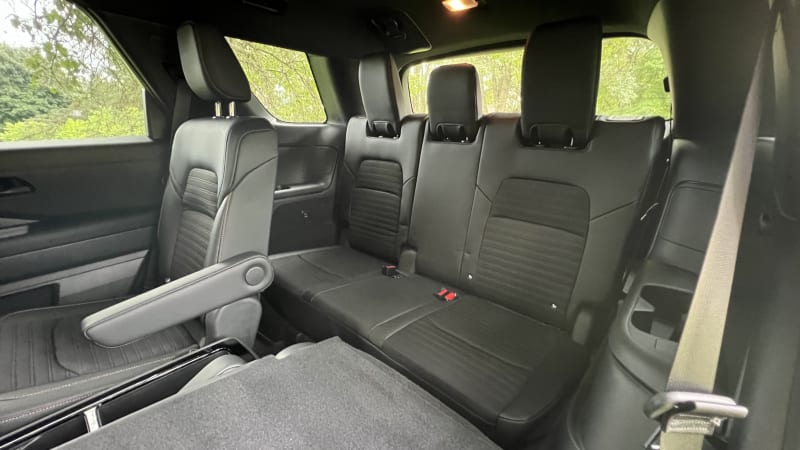 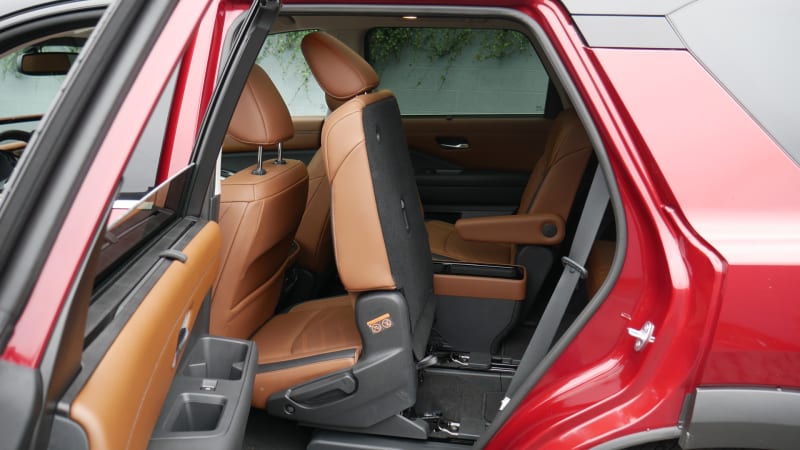 How big is the Pathfinder?

The 2023 Pathfinder is basically the same size on the outside as the Palisade, Telluride, Subaru Ascent, etc. Differences inside are more noticeable, however, particularly in the third row where the seat is a little closer to the floor than you’d find in those mentioned above and therefore less spacious and comfortable. Nissan’s means of getting back there is better than most, however, as the second-row not only slides forward at the touch of a button (that’s quite common), but does so in a way that provides more space to squeeze back into the third-row and allows you to keep forward-facing child seats installed. That could easily be deal-sealer for some.

Cargo space behind the raised third row measures at 16.6 cubic-feet. On paper, that would make it barely better than the disappointing Toyota Highlander, but in practice, the Pathfinder’s boxy shape and useful under-floor storage actually help it carry more stuff than its specs would indicate. We could fit four medium-sized suitcases back there plus a duffle bag under the floor. It measures 45 cubic-feet with the third row lowered and 80.5 with both rear rows lowered, which are big enough that differences with competitors shouldn’t matter much. 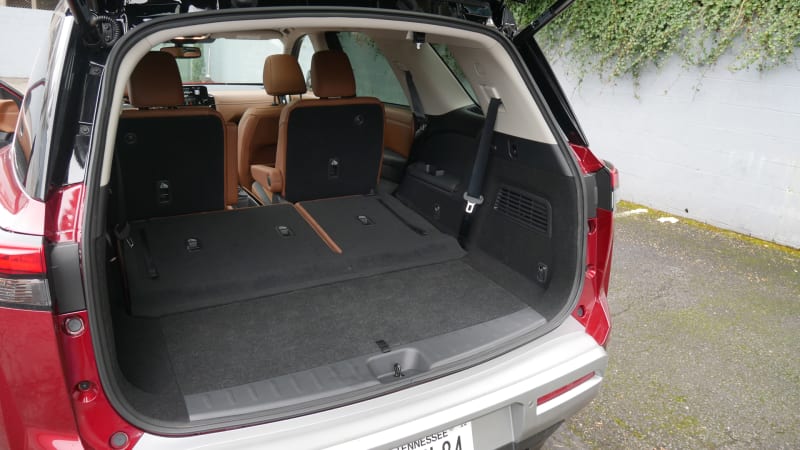 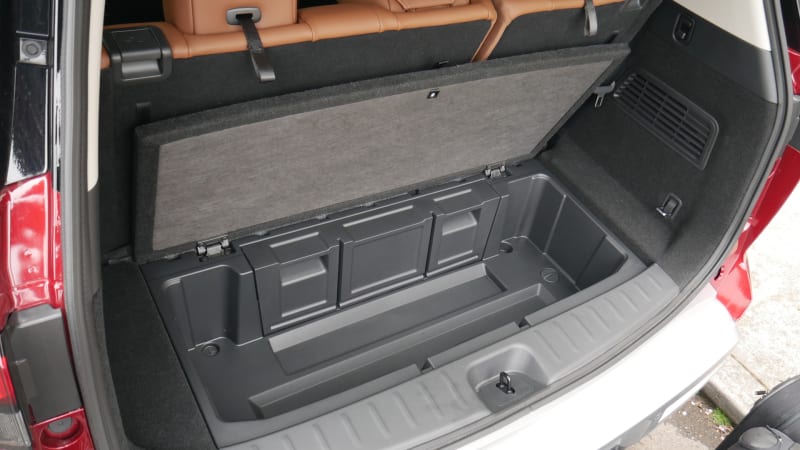 What are the Pathfinder fuel economy and performance specs?

Like more competitors, there is only one engine on offer: a 3.5-liter V6 good for a competitive 284 horsepower and 259 pound-feet of torque. It is paired to a nine-speed automatic, and either standard front-wheel drive or optional all-wheel drive. Fuel economy is 20 mpg city, 27 mpg highway and 23 mpg combined with FWD. Surprisingly, AWD fuel economy is actually better in the city, but effectively the same: 21/27/23. The Platinum AWD trim goes down to 20/25/22, while the Rock Creek Edition and its all-terrain tires dive further to 20/23/21. All these figures are typical for the segment.

With the available tow hitch, the Pathfinder can tow 6,000 pounds, which is more than the segment’s 5,000-pound norm. 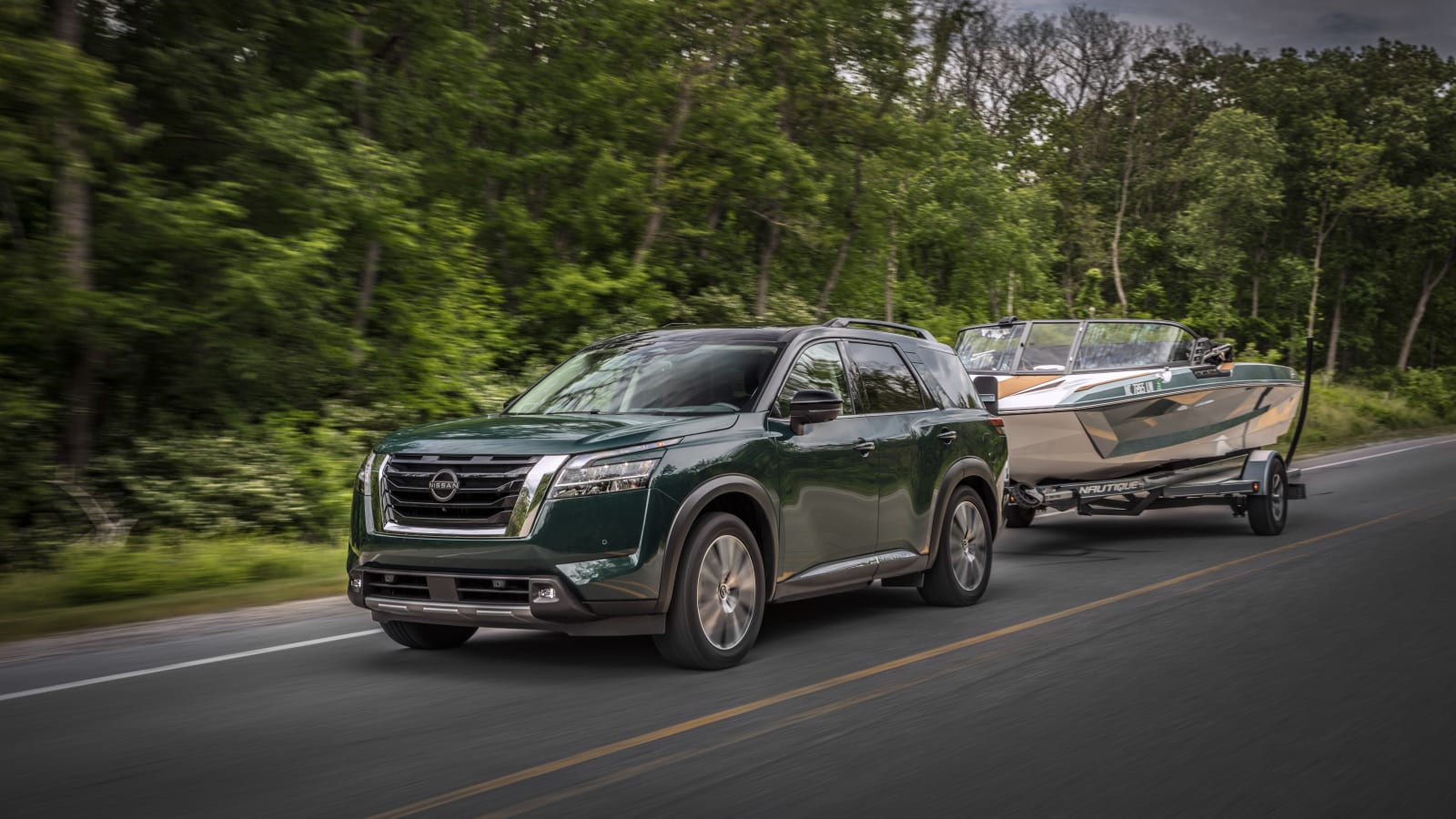 We thankfully no longer have to gripe about a CVT mooing on as the Pathfinder chugs up a highway on-ramp – the new nine-speed automatic added with last year’s redesign does its job commendably enough that we didn’t really notice it. The same can largely be said of the 284-hp V6, which is sufficiently strong for the segment but hardly a standout for better or worse.

The latest Pathfinder is also notably more composed than its squishy, bobbing predecessor with better-weighted steering. Still, the steering effort and response never feels quite right – perhaps a tad too slow given the amount of effort – and the suspension with the available 20-inch wheels produces an usual ride that combines a firm response to harsher impacts with a relaxed response to larger bumps and undulations. You get the impression Nissan didn’t quite know which lane to choose, so to speak, while tuning the Pathfinder. Its competitors are more coherent.

The Rock Creek Edition doesn’t suffer too badly for its off-road-tuned suspension and all-terrain tires when you’re firmly planted on pavement. There is more tire roar, but it’s not as significant as some other ruggedized family haulers. You’ll also find it to be far more civilized on-road than a Toyota 4Runner, for instance. Off-road, that ancient Toyota will make a mockery of its one-time apples-to-apples competitor that has since become a three-row crossover. Nevertheless, the Rock Creek’s upgrades are definitely improvements over what you’d get in other Pathfinder trims should you frequent camp sites or other outdoor spots.

What other Nissan Pathfinder reviews can I read?

Read this for more information about all that changed for 2022, plus a deeper dive into what it’s like to drive. 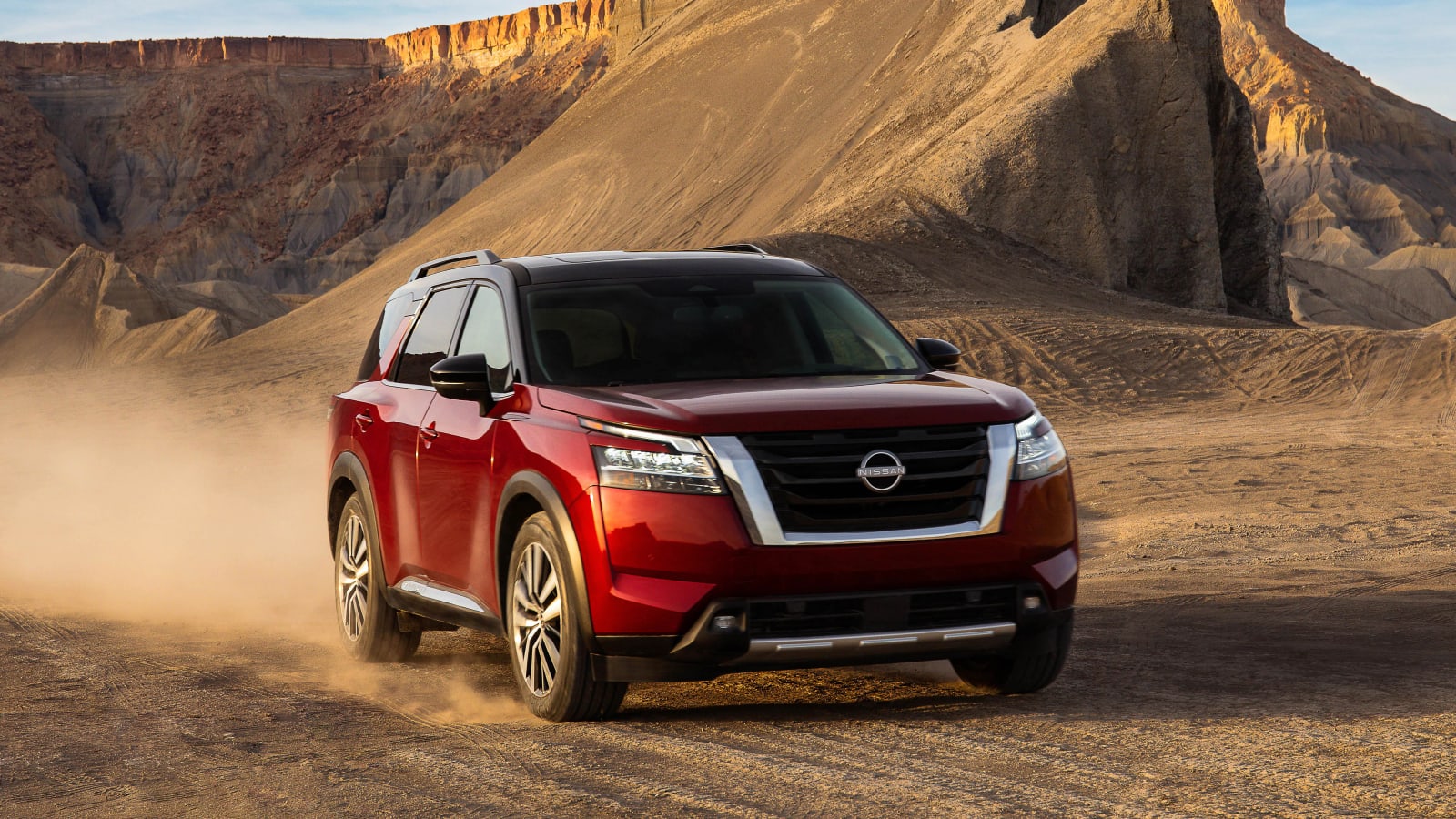 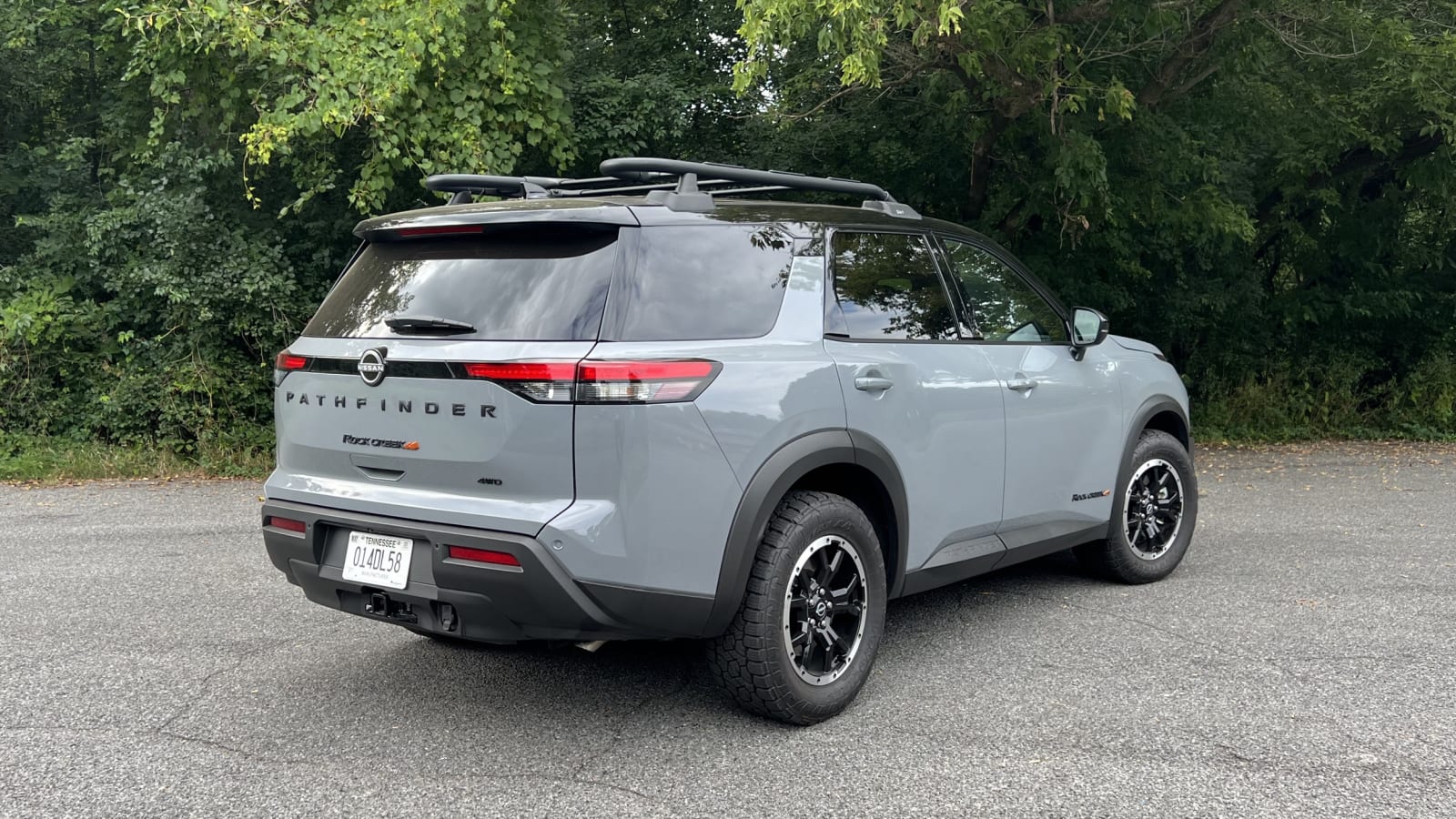 See how much you can fit behind the raised third-row seat, plus comparisons to most competitors. 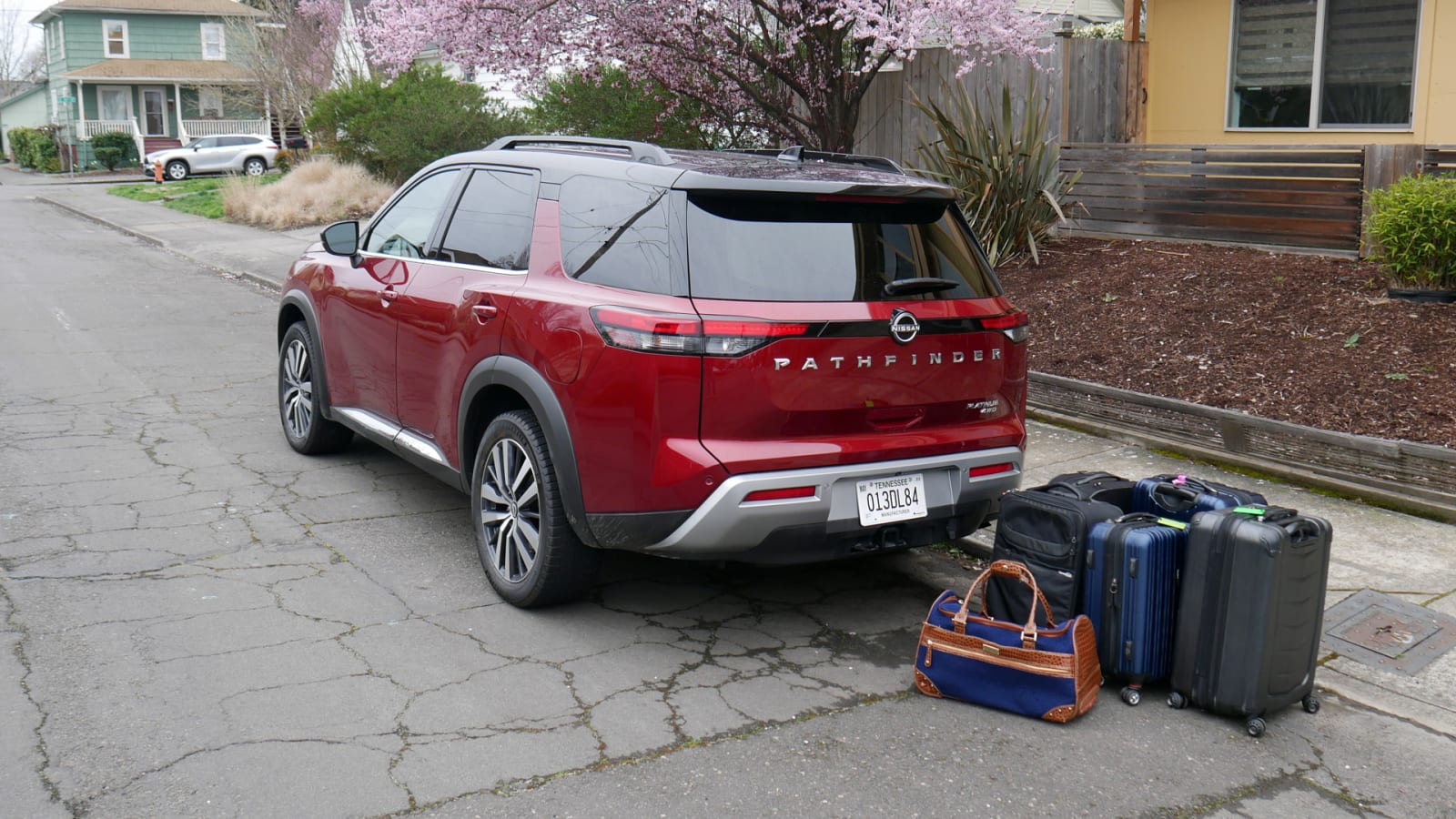 What is the 2023 Pathfinder price?

Pricing starts at $36,295, including the $1,295 destination charge, for the base Pathfinder S trim level. All-wheel drive is a $1,900 option on all below trim levels except the Rock Creek Edition, which is AWD only.

You can find feature content for each of the Pathfinder trim levels here on Autoblog. 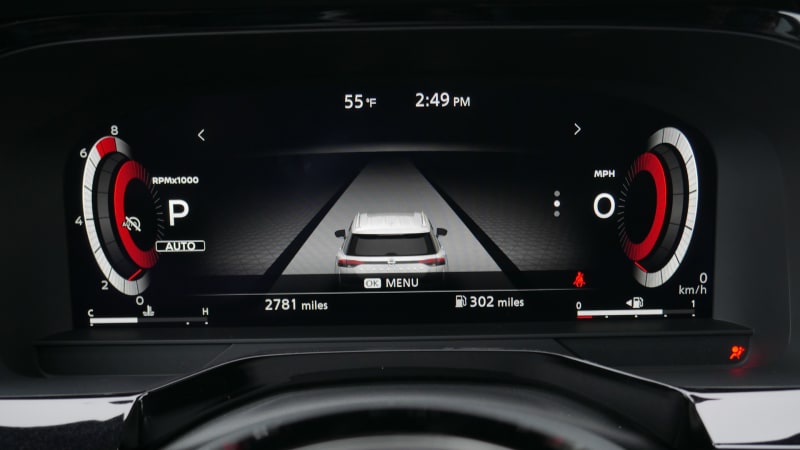 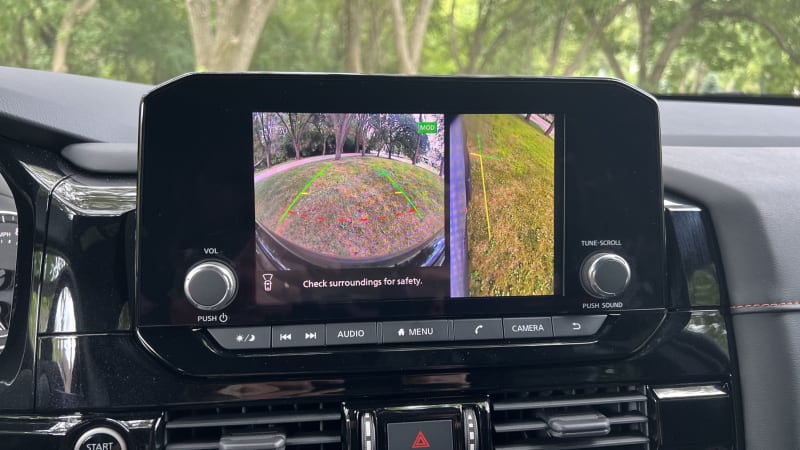 What are the Pathfinder safety ratings and driver assistance features?

Every 2023 Pathfinder includes forward collision warning with automatic emergency braking that detects pedestrians and cyclists; rear automatic braking (a rare feature); blind-spot and rear cross-traffic warning (usually optional); and lane-departure warning. Steering intervention for the blind-spot and lane-departure system is added on all but the base S. The top three trims also have Nissan ProPilot Assist, the advanced adaptive cruise control system that adds well-executed steering assist system. You have to keep a hand on the wheel, but the car does most of the work.

The NHTSA gave the Pathfinder four out of five stars for frontal crash protection and five stars for side crash protection, but had not awarded an overall rating at the time of this writing. The Insurance Institute for Highway Safety named it a Top Safety Pick+ for its best-possible performance in all crash categories (including the new updated side test) and for its forward collision mitigation system. Its “Acceptable” headlight ratings was enough to attain the award as well.