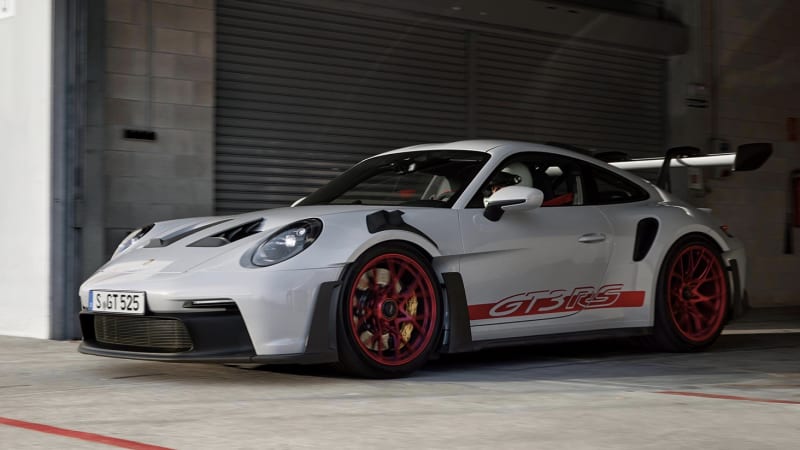 Porsche’s track-focused 911 GT3 RS returns for 2023 with more power and tech than ever before – at a correspondingly eye-popping price point. The Turbo S may be the flagship 911, but to many car geeks, the GT2 and GT3 RS represent the true pinnacles of 911-ness thanks to their back-to-basics focus on extracting performance at the expense of virtually everything else. They may not be the quickest in a straight line, but when it comes to on-track composure and raw human-machine interaction, they simply can’t be beat.

It would be easy to argue that the RS is basically a race car. The 992 GT3 RS is as close as you can get to a 911 Cup car while still being street-legal, but as a street car, it’s unhindered by series regulations or classifications. In other words, Porsche’s engineers can turn the performance dials up just as high as they please without running afoul of a sanctioning body while simultaneously sanding off some of the Cup car’s sharper edges so as to preserve the internal organs of customers who will never drive their RS models at the track. Yeah, you know they’re out there.

To wit, while the 992 Cup car makes do with 510 horses and a six-speed sequential gearbox, the 2023 GT3 RS extracts 518 horsepower and 346 pound-feet of torque from its naturally aspirated 4.0-liter flat-six and puts it to the ground through a far more refined seven-speed PDK. Porsche says that’s good for a 0-to-60 time of 3.0 seconds flat. From here, Porsche reaches into a different motorsports parts bin for some aerodynamic cleverness. Trickling down from the 911 RSR and GT3 R is a new center-mounted, single-piece radiator that clears way on either side for a new active aerodynamics package.

This new active aero system utilizes continuously adjustable wing components front and rear to allow for fine control over performance no matter the situation. In combination with the rest of the RS’ air-channeling fixtures, it can provide 900 pounds of downforce at 124 mph and a whopping 1,895 pounds at 177 mph. Flip it over to drag reduction mode and the wings go flat, helping the GT3 RS achieve its 184 mph top speed. The wings can also be deployed in max-drag mode to act as supplemental air brakes.

The RS gets a brake upgrade over the standard GT3, with larger (by 2 mm) front pistons grabbing 408 mm discs; the rear axle retains the GT3’s 380 mm discs and four-piston fixed calipers. An optional carbon ceramic (PCCB) package returns with larger rotors (410 mm up front; 390 in the rear). Center-locking wheels also return (20 inches up front; 21 in the rear) wrapped in Michelin Pilot Sport Cup 2s in 275/35R20s and 335/30R21s, respectively. Weight is kept to an athletic 3,268 pounds thanks to a generous helping of carbon-fiber reinforced plastic (CFRP) body and interior components.

But while some may still view the 911 as the everyman’s supercar, the GT3 RS is far from a bargain even at sticker price. For 2023, that’s $225,250 (including $1,450 for destination) — roughly 20% more than the “suggested” price for the old 991-generation GT3 RS. Not that it matters much in a market that treats sticker price like the Pirate’s Code. Look for the RS to arrive stateside in the spring.