Say hello to the 2024 Ford Mustang. Dodge may have just put the pin in its V8-powered muscle cars, but Ford is far from done selling its fire-breathing coupe as the Mustang enters its seventh generation.

Rumors of hybrid powertrains flew for years leading up to this Mustang’s reveal, but in the end, Ford is sticking familiar engines under the hood of this new pony car. A revamped 2.3-liter turbocharged four-cylinder is the Mustang’s base engine, and an updated 5.0-liter Coyote V8 remains the engine for the GT. In typical Ford fashion, power figures for both are not being made available at the car’s initial reveal, though a ford engineer let slip during its debut that it should produce 480 horsepower. Officially, however, Ford is saying only that the 5.0 will produce more power than the current car’s 460 horsepower and 420 pound-feet of torque. A six-speed manual transmission now with rev-matching tech will be available for the GT, but the EcoBoost will be automatic-only starting in 2024 — Ford tells us the manual take rate on the four-cylinder was simply too low to justify offering it once more. The 10-speed automatic transmission on the previous Mustang carries over with some changes to the oily bits and new tuning for enhanced performance.

The performance boost for the 5.0-liter V8 will come largely from a new dual throttle body design for more air intake, a new exhaust manifold for better airflow, a longer duration exhaust camshaft to handle the increased airflow and the addition of port injection alongside direct injection (the previous gen was direct injection only). As for the EcoBoost, Ford says it features a new twin-scroll turbocharger and a high-speed wastegate for better responsiveness, a new modular power cylinder architecture (we’ll see this across Ford’s turbocharged four-cylinder lineup) and similar to the 5.0, now features both port and direct injection.

And if that’s not enough for you, well, there’s the Dark Horse — a new performance-oriented model that will spawn track- and racing variants of the seventh-gen pony car. 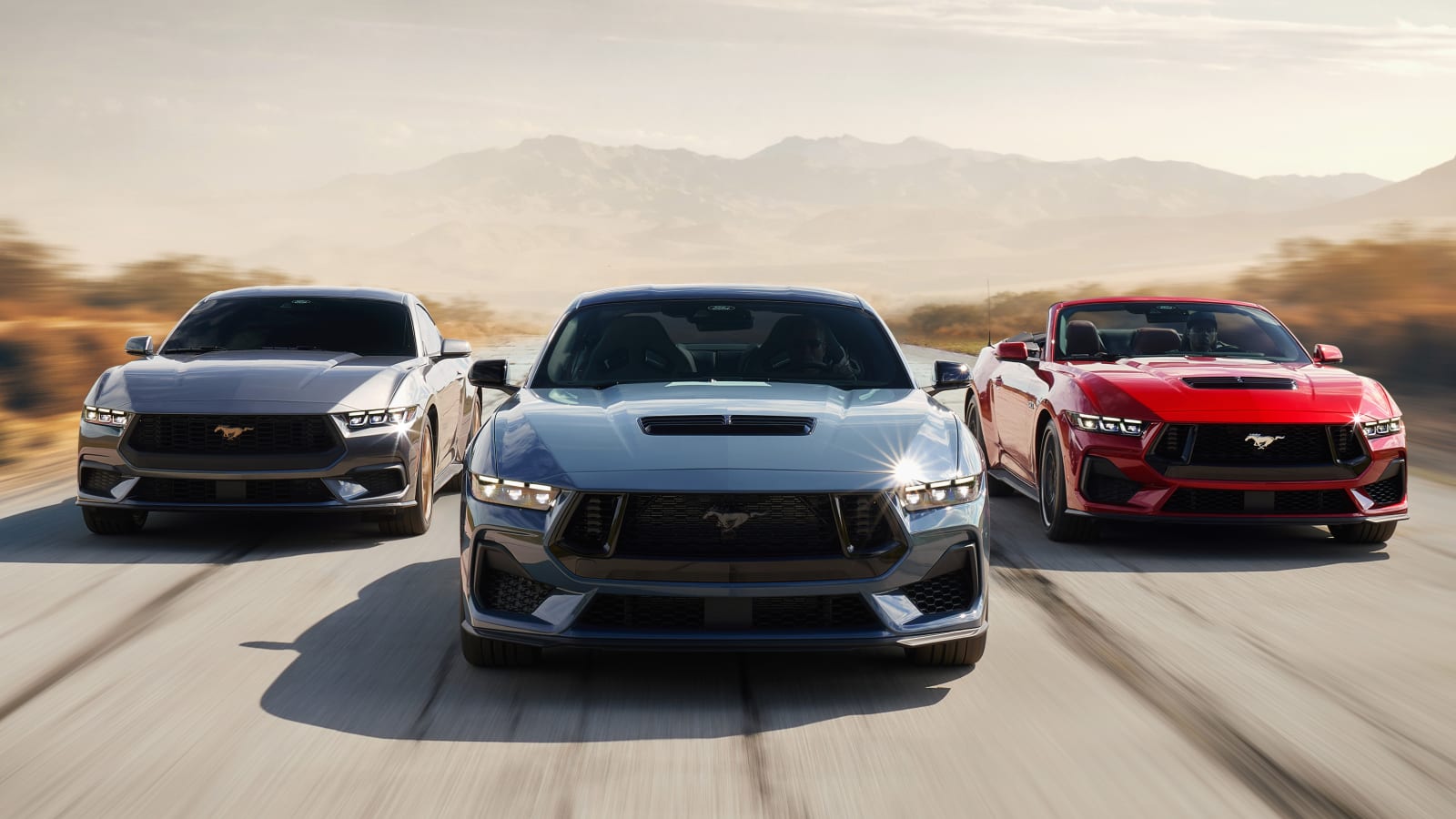 OK, but how about that new design? We suspect it’s going to be polarizing, as it’s far edgier (literally) than before. The EcoBoost and GT feature differentiated front end designs. You’ll notice that the grille on the GT is bigger than the four-cylinder’s, and it also features those odd-looking pods within. Functional hood vents are prominently placed on the GT but won’t be found on the EcoBoost. All Mustangs get the new tri-bar LED headlights, and Ford says it’s optimized the roofline to allow easier entry and exit with a racing helmet on.

In the rear, we can’t help but notice how high the black plastic creeps up the bumper — it’s not as bad as the WRX’s plastic butt, though it does remind us of that look. Ford went full drama on the rear with its sharply angled shaping and pointy appearance. The tri-bar taillights carry over, but they’re made to be even more showy with the intense angularity. In similar fashion as the sixth-gen, all GTs get a quad-tipped exhaust, and EcoBoost models get a dual exhaust. The tips are framed by a new rear diffuser design that Ford claims improves the aerodynamic balance of the rear.

In addition to the Coupe, Ford is revealing the Convertible today. There are no major changes in the soft top design or functionality with this new generation, as it continues to be electrically operated with the assistance of a single-handle center latching mechanism. 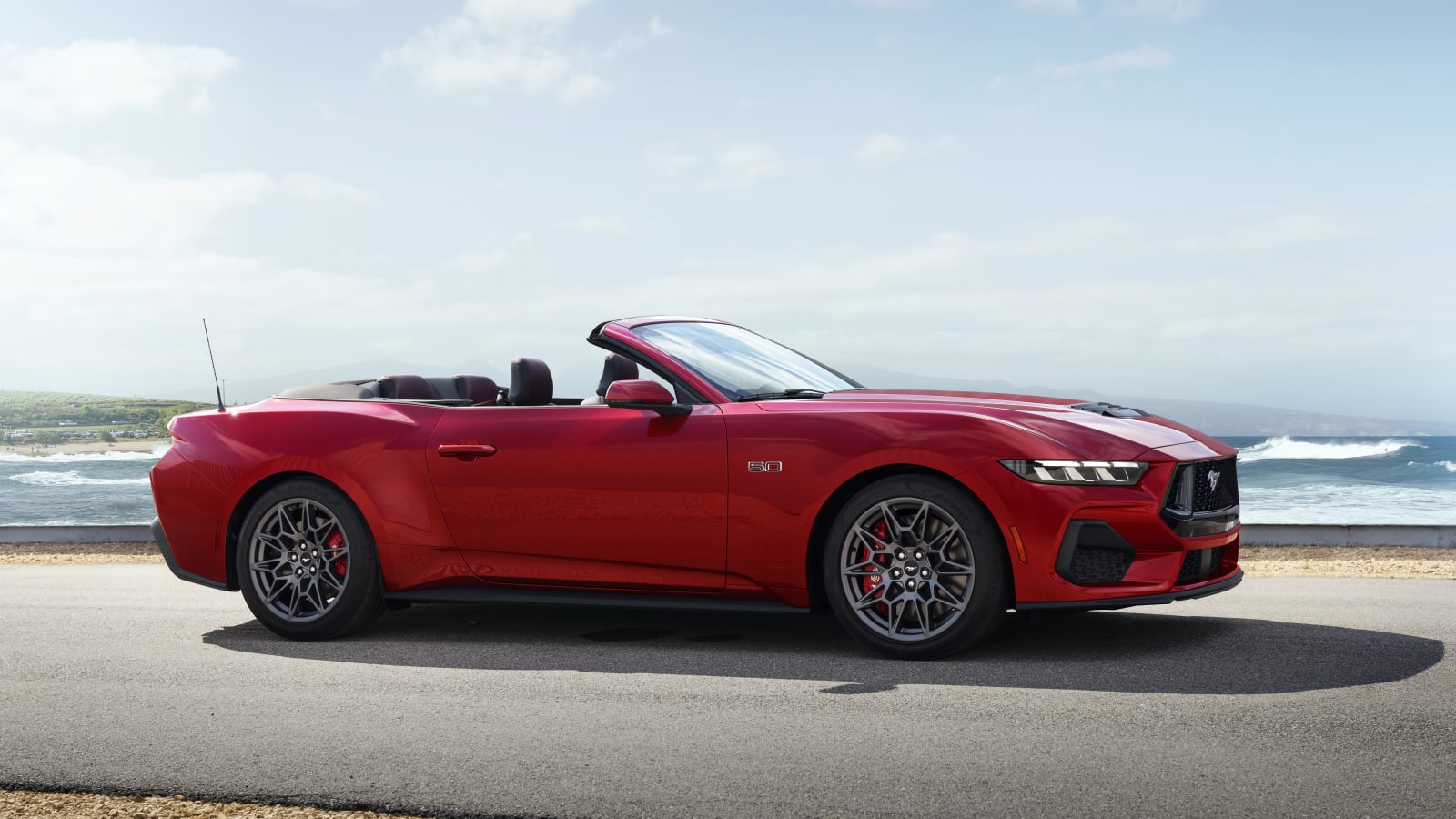 When it comes to the design details, Ford says wheel sizes range from the base 17-inch wheels up to optional 20-inch wheels on the GT (standard with 19s). You can choose between three caliper colors — black, red or Grabber Blue — and 11 exterior paint colors. Many of the paint colors are carryover from the previous generation, but Vapor Blue and Yellow Splash are new. Ford tells us that Vapor Blue is meant to give a faint resemblance to the spectacular Mystichrome paint of yesteryear.

If you want even more customization, Ford will be offering “Mustang Design Series” options, the first of which is a Bronze Design Series Appearance Package that adds bronze wheels and badging to the exterior.

The chassis under all this new bodywork is a revised version of the sixth-generation car. Ford tells us it’s made a number of changes to increase structural stiffness, but didn’t go so far as throwing numbers at the wall. Some materials changes were made to various suspension parts with Ford opting for lighter aluminum this time around. A new steering rack with a quicker ratio and new mechanicals are meant to both quicken response and provide more feel. There’s enough to go on here to make us think the new Mustang will be a better handler, but the jury remains out as to how much better — Ford made the most important change last generation to an independent rear suspension design, allowing for the Mustang to transition into more of a sports car than a muscle car.

There’s only one “Performance Pack” being offered at the start on the seventh-gen Mustang, but it’s a similar package as what saw on the previous car. Opt for the package on either the EcoBoost or GT, and you get a front tower brace, Torsen limited-slip differential, wider wheels and tires and larger Brembo brakes. Exclusive to the GT are brake ducts, enhanced engine cooling, and an auxiliary engine oil cooler. Thankfully, Ford is continuing to offer its MagneRide active suspension as an option on top of the Performance package. Additional options include Recaro seats and Ford’s active exhaust system. Engineers tell us it’s maxed out the allowable volume on the exhaust system for the GT this time around, so expect an even louder bellow for the seventh-gen GT. 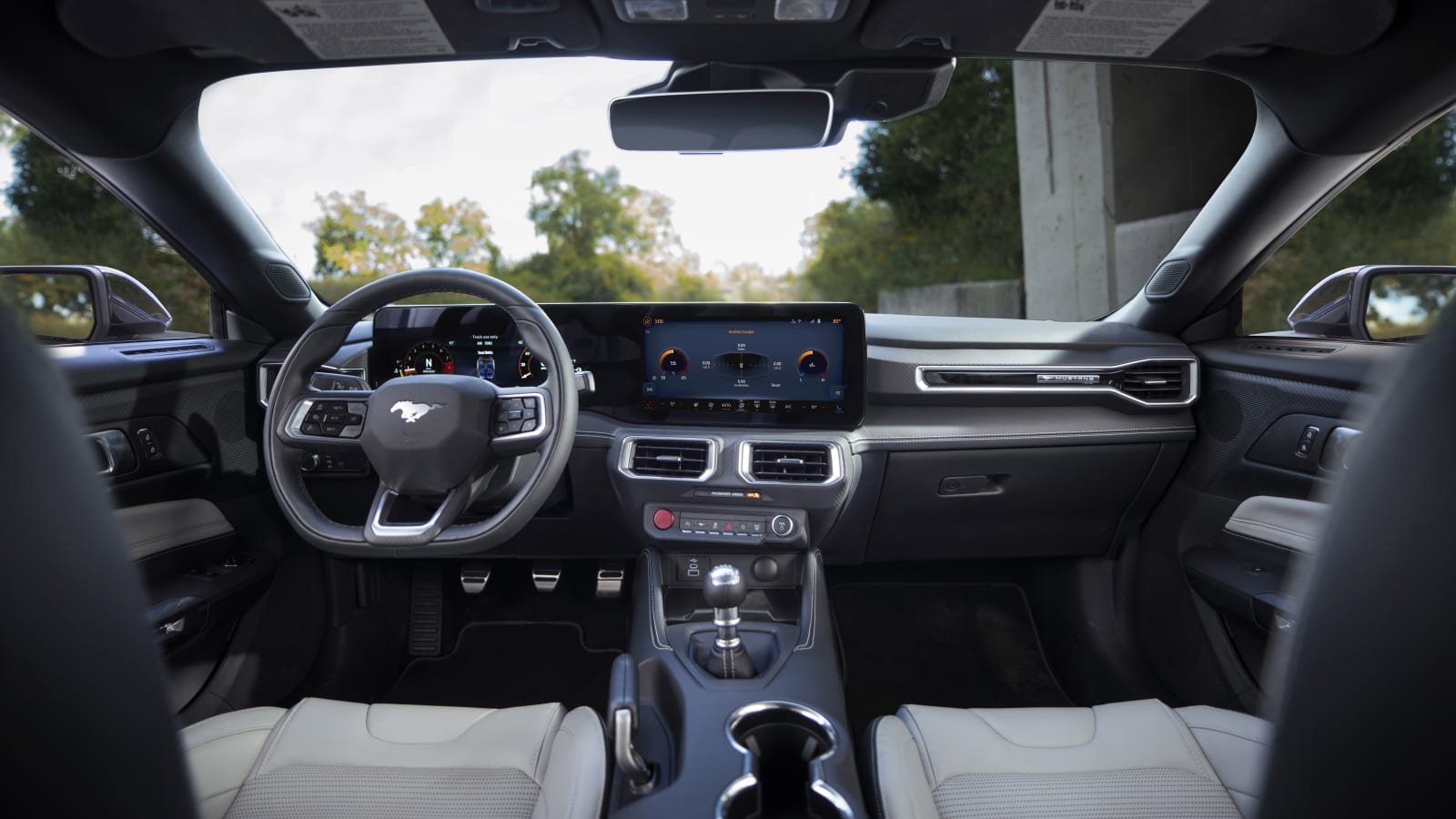 On the inside, this Mustang is drastically new and different. Ford threw out the playbook and decided to go all-in on screens. The base model has two free-standing screens: one digital instrument cluster and one touchscreen infotainment system. Step up to the Premium trim, and this becomes one giant monolith of screens kept apart by a glossy black separator —  the central infotainment measures 13.2 inches in size, while the cluster is 12.4 inches. The vast majority of your car controls can be fiddled with inside these screens, as Ford has deleted most of the physical buttons for the radio and climate control found throughout the cabin of the previous model. Ford claims that this is what Millennials, Gen-Z and traditional Mustang buyers want, but you can just as easily interpret it as a cost-savings measure.

The steering wheel gets a new flat-bottom design, and the base seats get better quality cloth than before. Ford will also offer Micro Suede vinyl seats and ActiveX-upholstered seats on the EcoBoost, while the GT will be available with real leather inserts.

Tech is aplenty, with those new screens using Sync 4 software that feature wireless Apple CarPlay and wireless Android Auto. A wireless phone charger situated in the center console is available. An optional B&O audio system will provide better-sounding tunes, and the cabin is littered with customizable ambient lighting. Driver assistance tech in the form of Ford’s CoPilot360 will be standard, with notable equipment including adaptive cruise control, lane-centering, evasive steer assist and even rear auto-braking assist. If you get the Performance Package with the active dampers, you also get “Active Pothole Assist,” which is a feature designed to save your wheels and tires by adjusting the suspension damping to better react to potholes in real time via monitoring of the suspension, body, steering and braking inputs. Hopefully, it’ll save some bent wheels and blown out tires, all while smoothing the ride out. 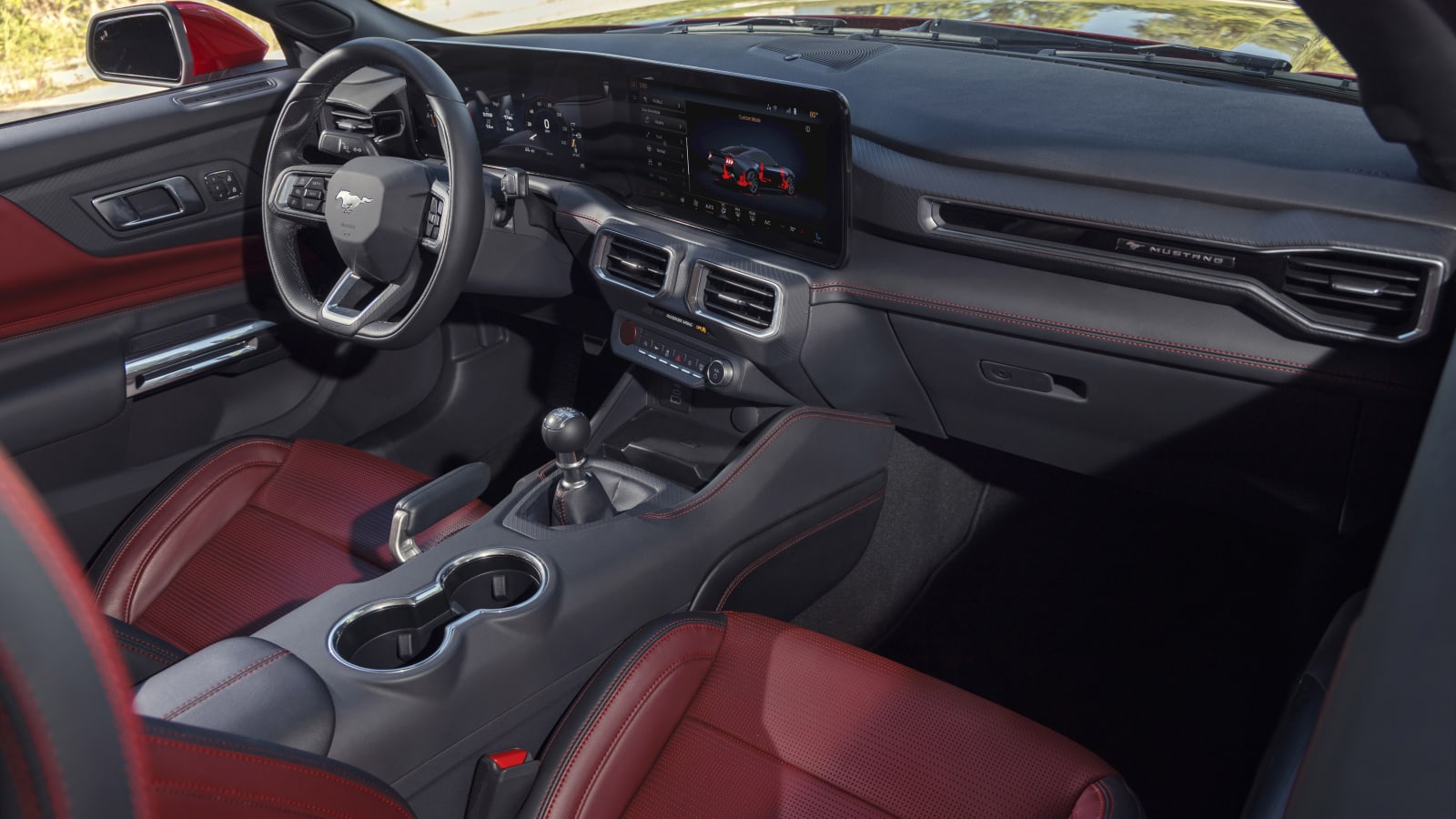 The cluster screen uses Unreal Engine 3D creation that you see in video games to display and animate designs and drive mode visuals. It even has some epic gauge settings — for example, there’s a Fox Body setting that mimics the gauge display of Mustangs from the Fox Body era. Now that’s rad. Other intriguing new performance tech includes a new “Performance Electronic Parking Brake” for drifting that we’ll explain in a separate post. Plus, a new “remote-rev” feature will come on automatic Mustangs that can be activated via the key fob.

Ford says the 2024 Mustang will initially go on sale in summer 2023, and it will continue to be assembled at Ford’s Flat Rock, Mich., plant.