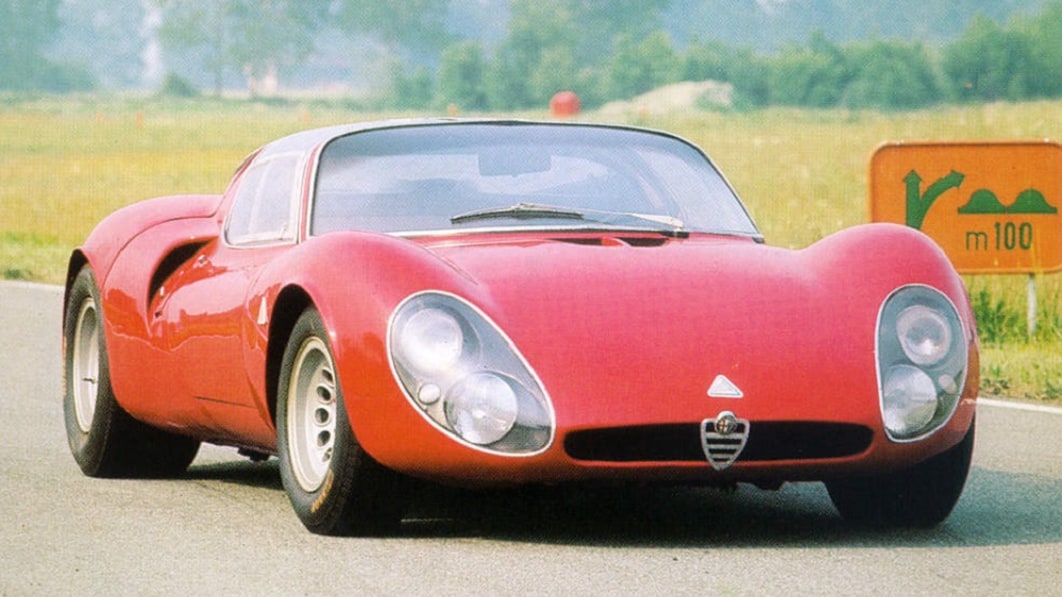 Alfa Romeo’s on-again, off-again range-topping sports car is back in the pipeline. Company boss Jean-Philippe Imparato confirmed that a two-door flagship is on track to make its debut in 2023 as a concept whose exterior design will draw inspiration from historic models.

“You will see something in that field in terms of sportiness in the first half of 2023. We use one word to define the brand, and it’s ‘sportiness,'” the executive told British magazine Autocar. He’s previously voiced his support for bringing back the dormant GTV and Duetto nameplates.

Imparato added that the yet-unnamed model will borrow styling cues from the Tipo 33, though he didn’t specify which version of the car he has in mind. Alfa raced several evolutions of the Tipo 33 from 1966 to 1977, and it sold 18 units of a Franco Scaglione-designed supercar with a mid-mounted engine called 33 Stradale (pictured) between 1967 and 1969. We’re guessing it’s the latter that will provide inspiration.

Numerous points remain up in the air, like what will power the car. “For the moment, I have two scenarios: full ICE or full EV,” he revealed to Autocar. Regardless, the model “will be very exciting, very selective, and very expensive.” It sounds like production will be limited.

We’re about four months away from 2023, so we won’t have to wait long to discover the concept that Alfa Romeo is working on.

Executives have toyed with the idea of adding a sportier model to the range for several years, but they have never pulled the trigger. Imparato explained in 2021 that the brand wouldn’t release another two-door car until it increased its sales in more mainstream segments of the market. What’s changed since then is unclear; the Tonale unveiled in February 2022 is the only new Alfa Romeo released since. (A Dodge Hornet badge-engineered version of the Tonale was revealed this week.)

Traveling further back, in 2018 former Fiat-Chrysler Automobiles (FCA) boss Sergio Marchionne announced that the 8C and GTV names would make a comeback on a pair of coupes. The former was presented as having a carbon fiber chassis and 700 horsepower thanks to a gasoline-electric hybrid powertrain built around a mid-mounted turbocharged V6. The latter was also planned as a hybrid, but it would have offered drivers 600 horsepower, and a sketch made it look like a two-door version of the Giulia sedan. Both cars were canned by 2019.