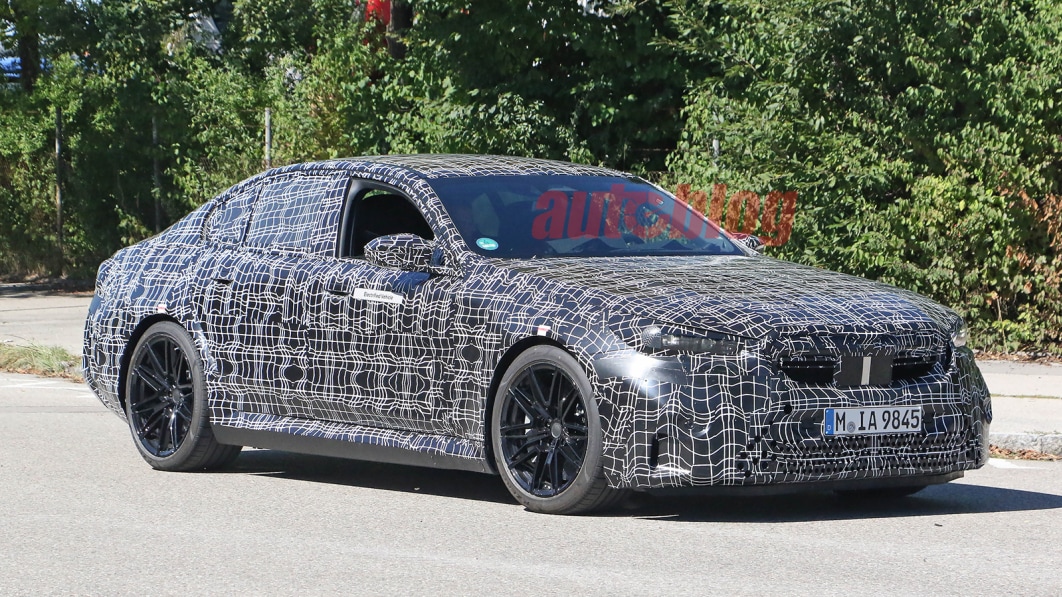 The next-generation BMW 5 Series has been caught in spy photos once again. This time, we get a look at both the regular model and the high-performance M5, both with significantly less camouflage and a clearer look at the lights and grilles. Overall, the cars look like the most conservative redesigns for BMW sedans yet, which may be a relief to fans of the brand.

That’s not to say that the new one won’t see particularly large changes. The headlight design seems to borrow from the 2 Series coupe with scowling, triangular housings that sweep more upward and line up with the hood shut line. Between those lights is a grille of comparatively modest proportions in regard to other recent BMW products. It definitely looks larger than before, but not by a huge degree, and it retains the more horizontal layout we’ve grown accustomed to. That grille also leans forward, and the hood is contoured to the grille’s outline at the leading edge.

The 5 Series profile is actually a bit difficult to distinguish from the current model. It’s a very traditional sedan shape with the model’s typically restrained take on the “Hofmeister Kink” in the rear pillar. The new car does sport BMW’s flush-mounted electronic door handles, and the flanks look smoother with less pronounced creases than the current one. The M5 naturally has substantially wider fenders to fit fat tires. Unlike the M3, the M5’s rear fenders flow more smoothly into the doors.

Styling at the rear is similarly restrained. The taillights are about the most obvious change, seemingly thinner. The rest looks much like the old car, just cleaned up a bit. The M5 of course features large openings in the rear bumper for the quad-tip exhaust.

We’re expecting the new 5 Series to launch sometime next year as a 2024 model. We’ve seen a couple of different powertrains in prototypes including internal-combustion above and plug-in hybrids including the M5 shown at top. The M5 is expected to make more than 700 horsepower. We would expect to also see a full electric model to go along with the small i4 and the larger i7.

Now is your chance to vote for future Tesla Supercharger locations

Now is your chance to vote for future Tesla Supercharger locations