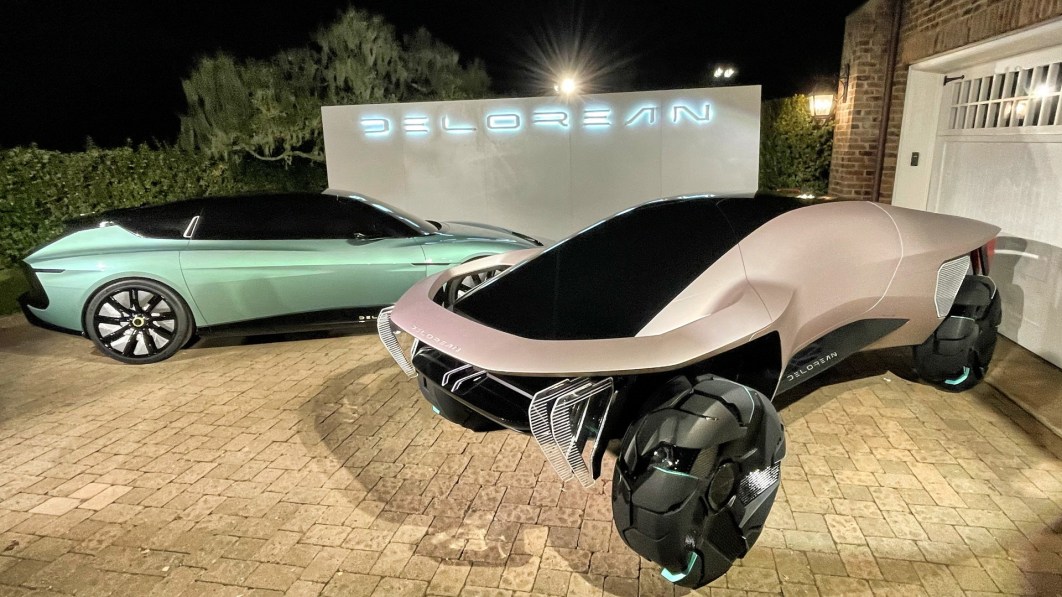 It’s not enough for some luxury automakers to show up to Monterey Car Week anymore; now that the event is effectively a gigantic auto show, getting more personal attention means booking an Airbnb party house for the weekend. Aston House changed location for better lawn views for its guests; Land Rover booked a pad to show the Range Rover Carmel; Maserati held a secret shindig for the GranTurismo Folgore; and DeLorean Reimagined laid up in a cozy, out-of-the way spot to introduce the Alpha5 battery-electric grand tourer and two concepts. The theme was “A Glimpse Into The Future,” all three vehicles fitting that bill, with the Alpha5 first to hit the market in two years. The first concept we could see following not long after. The second is for a very different time in a very different world.

The Alpha5 Plasmatail, “designed as an extension of the original coupe,” turns the four-seat, gull-winged Alpha5 into a shooting brake. There’s the same room for four passengers and more room for luggage, all tucked safely behind a pair of gullwing doors. The louvers on the grand tourer go away, the fast backlight replaced by some standup glass framed by a rear spoiler and wind-shaping bodywork. The rest is all there, from the airy greenhouse courtesy of lots of glass, to the three-layer taillights, sculpted diffuser, and center-lock wheels. Having grown out of the brand’s revival model, we’d guess the same powertrain motivates proceedings, that is, enough battery capacity to power 300 miles of range, and enough motor power to get to 60 miles per hour in a sliver under three seconds.

And what a coincidence we were just discussing the Audi AI: Trail Quattro Concept from 2019, a vision of futuristic, all-electric off-roader with a capsule-like form stood up high over integrated tires and wheels minimally covered by fender canards. DeLorean’s Omega concept would play in the hinterlands as a “complete departure from traditional automotive design” made for tackling Baja in 2040 — and it’s got integrated tires and wheels, too. A strip of tinted glass runs over the hourglass occupant cell providing excellent overhead views, the rear glass featuring hexagon-shaped elements that must perform some unknown but achingly cool function. The windowless side aspect, on the other hand, seems a bit more opaque. Aerofoil-like structures emerge from the cabin to shroud exposed suspension elements, and form front and rear bumpers that mount illuminated blades serving as headlights and taillights. The chance of a production model is likely near absolute zero, but we wouldn’t be surprised to see elements appear on future DeLoreans as the company gets out from under the ghost of the DMC-12.