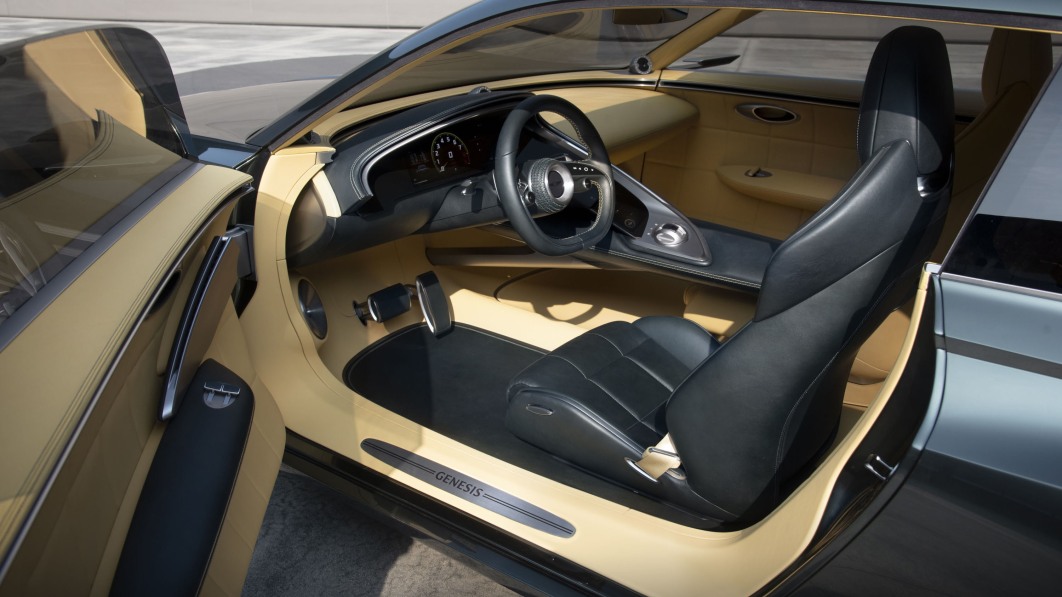 The Genesis X Concept began as an internal design exercise. When the automaker showed it to the public in April, acclaim convinced Genesis to turn the in-house exercise into an ongoing public exploration; so what began as a big battery-electric coupe has morphed into a fastback grand tourer that now has an interior that is equal parts sumptuous and minimal. The automaker showed the concept cabin during Monterey Car Week, the design hinging on the same “luxury of white space” ethos the brand creates its standalone dealerships around — strong design elements given room to assert themselves in a restrained, luxuriant background.

It’s effectively an evolution of the interior in the X Concept coupe, which itself advanced the design from the Genesis Essential Concept. Instead of the deep chestnut leather seats and instrument panel contrasted with black leather in the X, the X Speedium cabin is mainly done up in Monterey Gold leather. A new flourish here is having the driver’s seat, instrument panel, and center console element curving around the driver lashed up in Pinegrove Green. The green hue plays on the fastback’s Inje Green exterior color, named for the Inje Speedium track in Korea, and the tree-covered mountains surrounding the track.

The heavily driver-centric layout has been transcribed from the X Concept. The gauge cluster is a compact, curved OLED display, accompanied by a vertically-oriented display in the center console angled toward the driver for controlling the infotainment. That’s it. Everyone else should be prepared to entertain themselves. The rear passengers do get it better here than in the earlier X Concept, though, with defined, quilted leather seating instead of the former’s contoured bench. And everyone benefits from the obligatory fancy audio system developed with sound designer Guk-il Yu featuring aluminum tweeters.

It’s possible we’ll see elements make their way into Genesis production vehicles. Designer Luc Donckerwolke said, “This isn’t a show car — it’s a look into our design processes as we explore ideas for the next wave of EVs, one that incorporates Genesis’ DNA,” and, “This car is an open-door moment in Genesis’ journey towards our future EV design.” We’d be happy to open the door of a future Genesis that looks like this inside. If it looks like this or the X Concept outside, all the better.