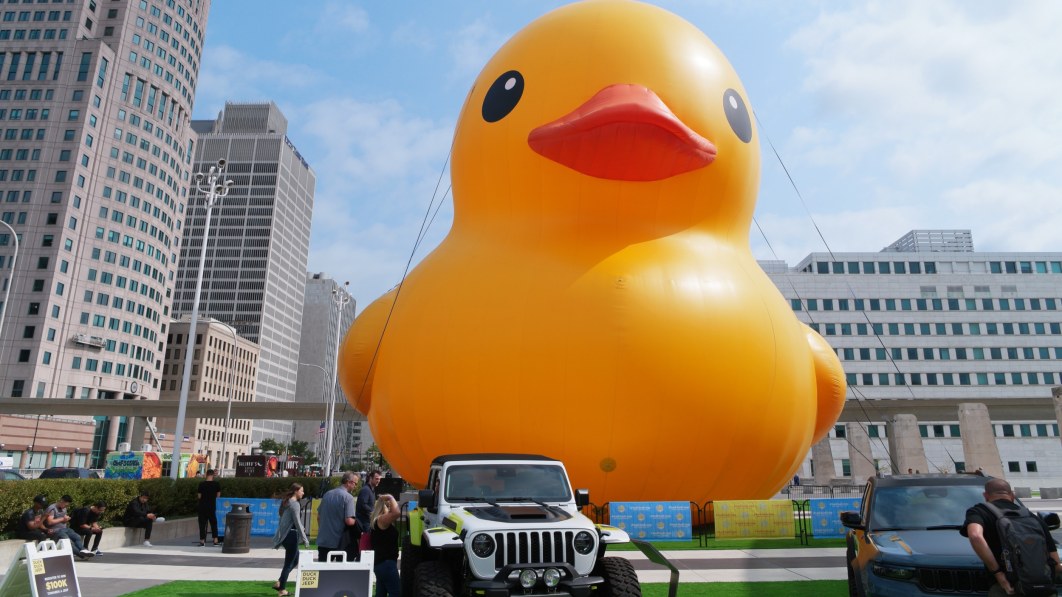 Chico Marx once famously asked, “Why a duck? Why-a no chicken?” Good question. Why is there a gigantic duck reaching to the sky at the Detroit Auto Show? Well, it’s a Jeep thing.

The “world’s largest rubber duck” — a 61-footer — is at Jeep’s display outside Huntington Place at the North American International Auto Show. For one thing, this inflatable King Kong of cuteness will draw people to the exhibit like practically nothing else at the show. The Detroit News quotes Thad Szott, president of the Detroit Automobile Dealers Association: “It was the tie into the Jeep brand and creating the festival-type atmosphere, creating excitement for the kids, and the new reimaged show” that made the duck an attractive get, Szott said. “Everybody loves the duck.”

But this is not merely an odd duck, not a random choice. The duck has a backstory. Why a duck? Because it commemorates a recent trend in the Jeep community called “ducking,” in which Jeep owners hand out rubber ducks to compliment one another’s rides.

The trend to deliver positive messages via duck (see what we did there, Chico?) started in 2020, as the News tells it, when Jeep owner Allison Parliament wrote “Nice Jeep” on a rubber duck and placed it on another Wrangler she liked. It wound up on social media, got a lot of likes, and led to a #duckduckjeep hashtag. And “ducking” caught on. You’re supposed to “duck” a Jeep surreptitiously if you can.

The newspaper article calls ducking a “movement,” which seems like a rather serious term for a little fun involving toy ducks. Then again, in just two years’ time, Parliament says she has personally given out more than 27,000 ducks, the hashtag has been used nearly 200,000 times on Instagram, and there’s a Facebook group with 67,000 members. Parliament says ducking has winged its way to 63 countries.

For a deeper dive on ducking, be sure to check out the Detroit News article linked earlier in this post. And head on over to NAIAS to get a gander at the duck yourself. The show runs through Sept. 25, and we’ll all be deflated when it ends, but none of us so much as the duck.