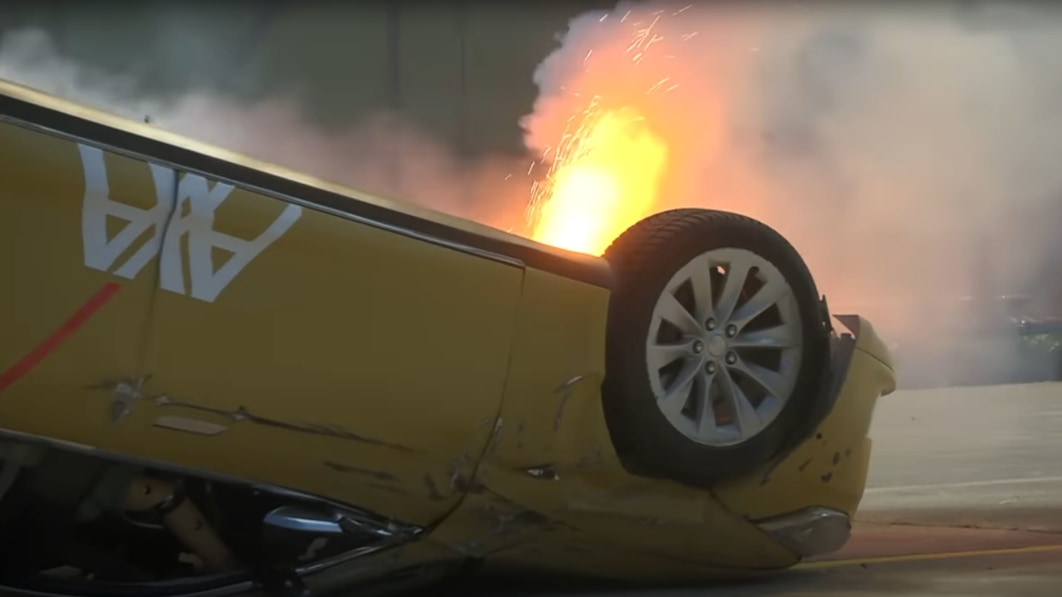 International insurance firm Axa has copped to faking a Tesla battery fire in a supposed crash test video posted online in late August. The test, which involved hopping a Tesla Model S over several obstacles designed to flip it onto its roof, was performed with a rolling chassis and the “explosion” and resulting fire at the end were staged using pyrotechnics, NPR reports.

Axa released a statement Thursday acknowledging that the “test” was staged and apologizing for any “false impression” to the contrary. The firm says it was merely trying to illustrate what it finds to be the inherent dangers of electric vehicles and encourage safe behavior behind the wheel, not indict Tesla for having above-average fire risk.

“AXA Switzerland’s statistics show that drivers of electric vehicles cause 50 percent more collisions with damage to their own vehicles than drivers of conventional vehicles with combustion engines,” the firm said. “What the statistics also show is that drivers of more powerful electric vehicles cause damage to either their own or someone else’s vehicle more frequently. Our aim with this year’s Crash Tests was to draw attention to these insights from our statistics and – at the same time – raise awareness of the risks that can potentially arise with accidents involving battery-powered cars.”

“When simulating an accident scenario where a battery-powered car catches fire, various safety precautions are taken in order to protect spectators,” it continued. “No battery cells were used in the test vehicle, for example, and the subsequent fire was extinguished under controlled conditions. In addition, the crash test with a Tesla vehicle did not cause the type of damage to the undercarriage that would be likely to spark a battery fire as the images would appear to suggest. The test that was carried out therefore did not confirm the hypothesis for this accident scenario. We should have made explicit mention of this fact in our communication measures after the test, namely in our press release and the related images that were made available.”

“AXA Switzerland’s crash tests are aimed at prevention, and they are used to flag up risks that are derived from our claim statistics as Switzerland’s biggest motor vehicle insurer, as well as to anticipate and start a discussion around emerging trends and potential risks. They serve to highlight potential accident risks on a general, non-make and non-model-specific basis, and cannot be compared to the standardized Euro NCAP crash tests,” it said.

Somehow, Axa felt that removing the electrical components from a vehicle and launching it off a stunt ramp would send a message about the dangers of electric vehicles in the real world; the irony appears to be lost on Axa’s executives, or at minimum its communication team. Hey, at least we know Tesla’s roof structure can handle the weight of, well, everything but its extremely heavy battery pack. What a waste.