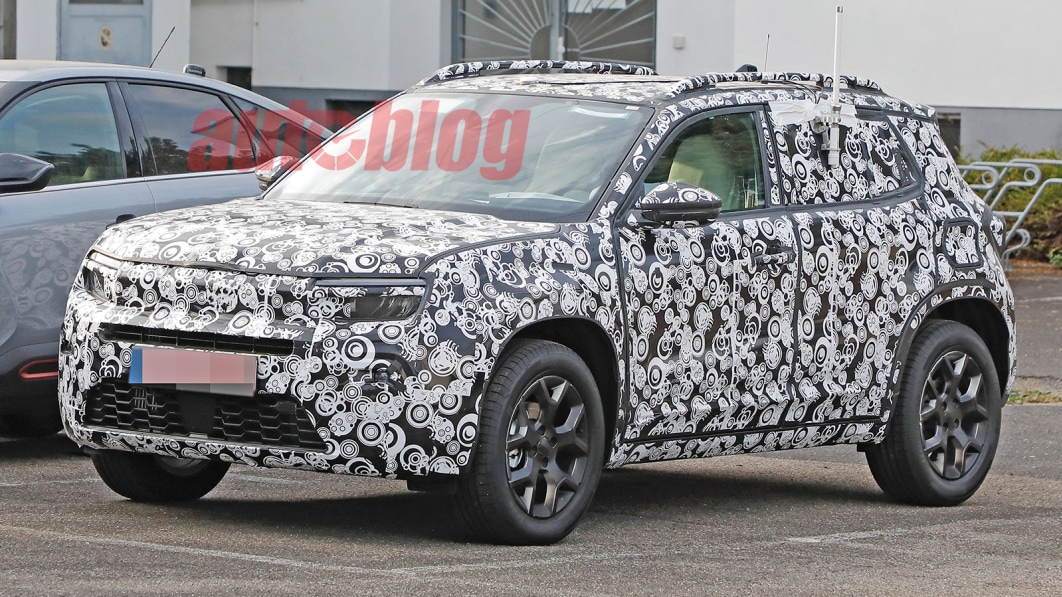 Jeep’s latest subcompact SUV, rumored to be called Jeepster, has been caught by spy photographers. These latest photos confirm that the vehicle previewed back in March was effectively the production model. They also give us our first look inside what will be the first Jeep offered with a full EV option.

From the outside, this Jeepster prototype really does look just like what Jeep showed months ago. The only real differences are a different set of wheels and the addition of an exhaust pipe. This is because this version has an internal combustion engine and a manual transmission. The Jeepster reportedly uses the CMP and eCMP architecture that underpins a few Peugeot and Opel subcompacts in Europe, particularly the Peugeot 2008 and Opel Mokka and their electric versions. Available in Europe is a naturally aspirated 1.6-liter four-cylinder making 115 horsepower and a turbo 1.2-liter four-cylinder making 155 horsepower. If either is offered in the U.S., we’d put our money on the turbo engine. The electric version should have the same 134-horsepower electric motor and 50-kWh battery as its siblings.

Just like the outside, the Jeep has a unique interior that looks quite different from the Peugeot and Opel versions. It adopts the popular full-width vent motif for the dashboard. Below that is a similarly wide shelf for all variety of items, followed by a bank of physical switches for climate control and a volume knob for the infotainment system. Said infotainment system features a touchscreen mounted to the top of the dash. It’s not as well-integrated as the systems on other Jeep models.

The gas versions of the Jeepster are expected to launch by the end of the year, with the electric version coming early next year. With the vehicle being based on existing Peugeot and Opel architecture, we’re left wondering whether we’ll see this tiny Jeep offered in the U.S., since that may require additional work to get it to meet American safety standards. We should know sooner than later with the production dates not far away.