This is the Lucid Air Sapphire, and it takes the Air to a whole new level of performance. Just revealed at Monterey Car Week, the Sapphire features a three-motor powertrain that Lucid says is capable of delivering over 1,200 horsepower.

That nutty amount of power will be good for 0-60 mph times in less than 2 seconds, 0-100 mph times in less than 4 seconds and a quarter-mile time of under 9 seconds, all according to Lucid. Top speed for the Sapphire is claimed to be “over 200 mph.” Unlike the Tesla Model S Plaid that posts similar acceleration figures, Lucid says that all of the times are doable without “protracted preconditioning routines.”

Similar to the Plaid, the Lucid Air Sapphire features two electric motors driving the rear wheels and one driving the front. Lucid’s twin rear drive unit is capable of providing a torque vectoring effect by providing torque to the rear wheels in opposite directions. It’s able to provide regenerative braking to the inside wheel while powering the outside at the same time to increase rotation and make for quicker turn-in, similar to what you’d see on a car with rear-wheel steering.

The Sapphire isn’t just about straight-line speed, though. Lucid installed stiffer front and rear springs, stiffer bushings and is running more aggressive damper settings. It also gets unique tuning for the electric power steering, stability control, traction control and ABS. Speaking of the brakes, carbon ceramic brakes come standard to ensure durability during high-performance driving. Larger wheels and tires are fitted — 265-section-width in front and 295-section-width in back. The Michelin Pilot Sport 4S rubber it’s using is developed specifically for the Sapphire and as such features the unique designation on the sidewall. In order to fit the wider rubber, Lucid has given the Air a widebody re-style. The front is 0.83 inch wider, and the rear is 0.94 inch wider than a standard Air. The new wheels (20-inch in front and 21-inch in rear) also feature carbon fiber aero disc covers to improve the drag coefficient — plus they look cool. 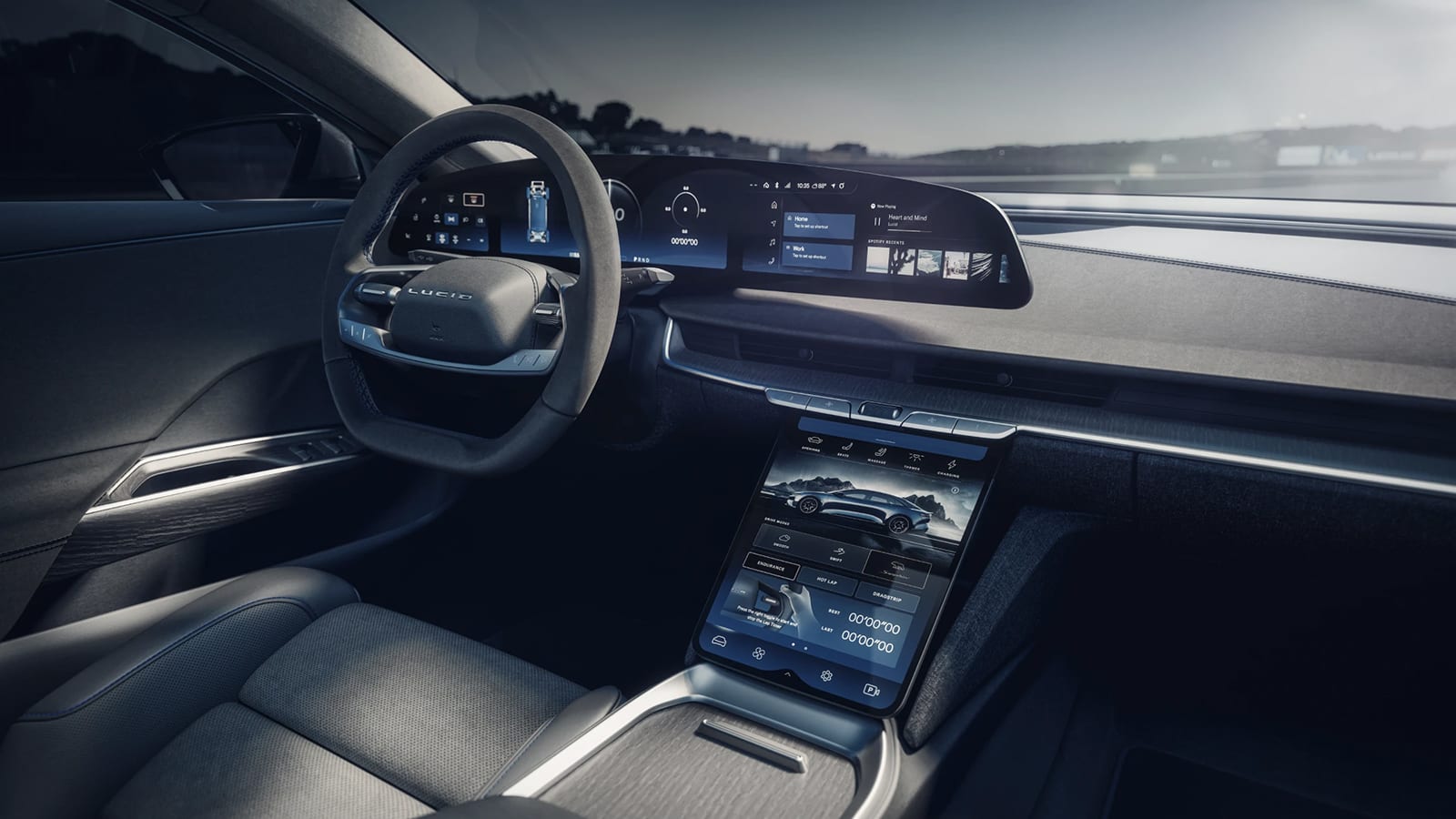 Lucid says it made light changes to the exterior in an effort to enhance downforce without greatly affecting range. Lucid doesn’t provide a range prediction, but claims it will retain the range advantage it holds over competitors.

To aid the high-speed driving the Sapphire will be capable of, Lucid installed new 18-way power sport seats that are trimmed in leather and Alcantara with Sapphire blue stitching. They’re still heated, cooled and massaged. The screen displays will have new performance-focused menus to check out and it’ll feature new drive modes, too. You’ll get the vehicle’s maximum performance in “Sapphire” mode.

Lucid says the Sapphire will only be offered as a limited-production model in the U.S. and Canada. Deliveries will begin next year, and the starting price is $249,000, not including a yet-to-be-announced destination charge. Lucid only has the Air in its lineup for now, but it says to expect a high-po Sapphire version of every car it produces in the future.