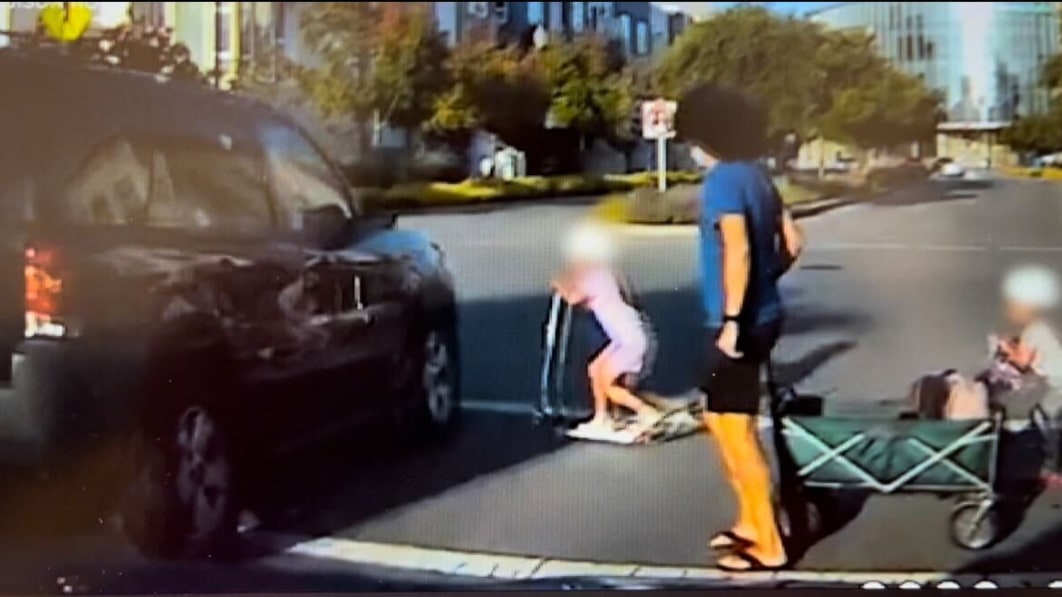 A crosswalk with flashing yellow lights is a high-visibility safety measure that can save lives — but only if motorists heed the lights. Last week in San Mateo, Calif., a child on a scooter barely escaped being hit by an SUV driven by someone who missed or ignored the warning lights and barreled on through.

The video above is a chilling reminder of just how easily disaster could strike while driving. The vehicular-homicide, go-to-prison, lives-destroyed-forever kind of disaster that can happen in an instant.

This is such as close near-miss, the SUV’s tire snatches the scooter out from under from the girl.

— For starters, obviously the SUV driver was very much in the wrong. In a statement, the San Mateo city manager mentioned that the driver was “inexperienced.” (The driver returned to the scene and gave a statement to police.)

— The child’s father appropriately triggered the crosswalk lights before venturing into the street. The car in the curb lane, which recorded the dashcam video we’re looking at here, could possibly have interfered with a pedestrian’s sightline of the inside lane and also the SUV driver’s full view of the crosswalk — except that the father wasn’t even looking at the traffic lanes, he was turned completely away trying to catch the girl as she scooted ahead. It was a mistake not to have the little girl by the hand, and a mistake for either child to be on scooters. Though even if holding hands, had the family walked out just a couple of seconds sooner, all three could have been killed.

No matter what kind of flashing signals or other safety infrastructure gets built, nothing beats basic skills. There’s even a slight chance that flashing lights might give a pedestrian a false sense of confidence that they’re safe.

So the basics worth reviewing here are:

— Drivers, slow down and approach crosswalks with caution. Be mindful that it’s easy to overlook a pedestrian because SUVs are tall and modern A-pillars are thick.

— Pedestrians, assess traffic before stepping out, make eye contact with drivers and even exchange a wave to ensure they’re seeing you back, wait until they’ve stopped, keep looking all around you the whole way across (and not at your phone), hold the hand of children crossing with you, and walk a scooter or bike across.

Be careful out there.