As the above photo will attest, Autoblog’s Advanced Institute for Luggage Testing has moved, dear readers. No longer will I need to worry about shooting in the rain or worrying about my frozen fingers being smashed by bags during the winter in Portland. Instead, I’ll need to worry about blazing heat at 8:30 in the morning or catching on fire, as we’ve relocated to Southern California. This isn’t the permanent spot (the new house, I mean Institute, is being renovated), but don’t worry, I made sure that the trusty collection of bags stayed with me. Priorities, eh?

Anyway, let’s talk about the 2023 Toyota Sequoia, because it sure is an interesting test case. All-new for the first time since George W. Bush was president, the Sequoia’s cargo situation is truly unique, and not necessarily in a good way. The specs say there is between 11.5 and 22.3 cubic-feet of space behind the raised third row. What’s up with the range rather than a single number? The Sequoia uniquely has a sliding third-row seat, which is a commendable feature in theory. Trouble is, you have to slide it all the way forward to achieve that maximum 22.3 number. You have to do no such thing in the Sequoia’s American rivals to achieve comparable on-paper cargo volumes: Chevy Tahoe/GMC Yukon (25.5), Ford Expedition (19.3) and Jeep Wagoneer (27.4). The Sequoia’s minimum number, 11.5 cubic-feet, would theoretically be worse than a Kia Sorento, which would be pathetic.

Alas, the Advanced Institute for Luggage Testing exists for a reason: Numbers don’t really tell the whole story. And rarely has that been more true than with the 2023 Toyota Sequoia. 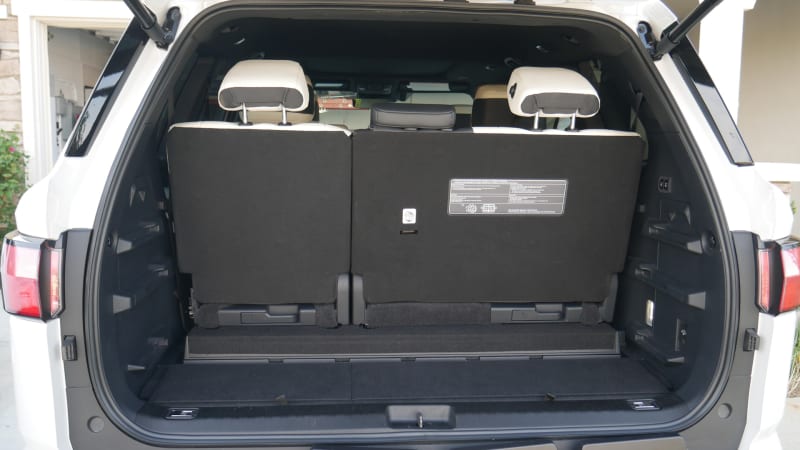 This is what you’re working with when the third row is slid all the way back. You’ll need to do this to achieve decent, adult-OK legroom in the third-row. All of the above American rivals still have more room, though, including far more headroom. 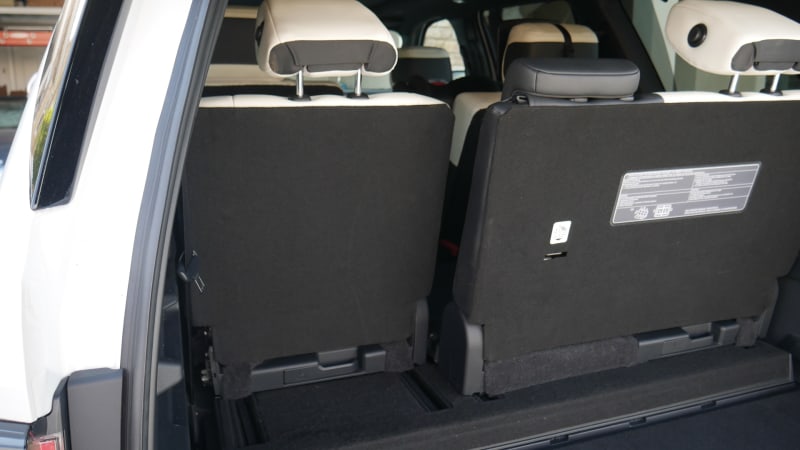 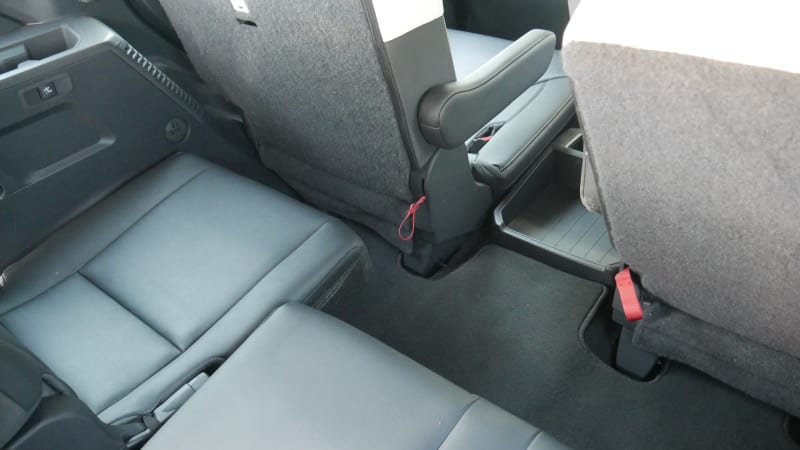 Above is the range of motion for the sliding third-row seat. Keep in mind that the second-row captain’s chairs do not slide, meaning you can’t move them up to counter the lost third-row legroom.

I set the third row to a distance where a small-to-average-sized person could comfortably sit there. You can see the difference above between that distance as well as the maximum rearward position. I tested with both seats at this middle distance as well as with the seats fully rearward. 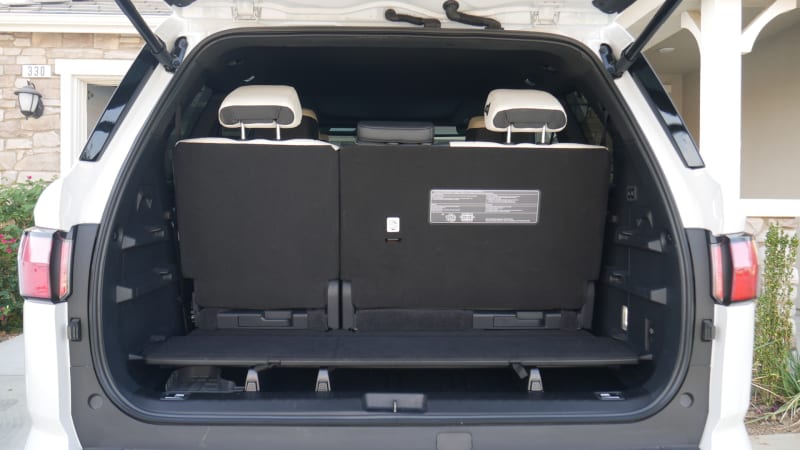 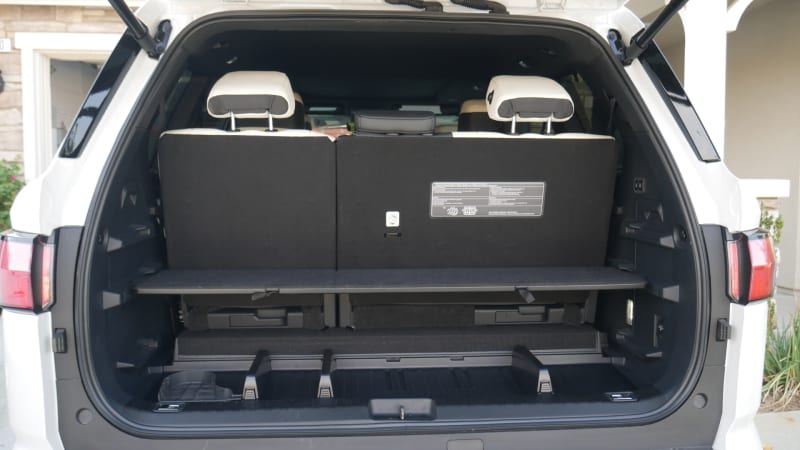 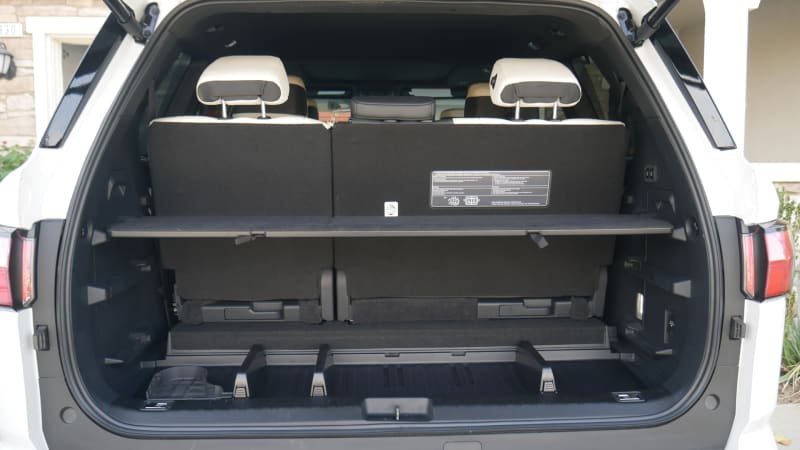 Now, even more housekeeping, because again, this thing is weird. There is a removable floor that can be placed at four levels: bottom, lower, middle and upper. 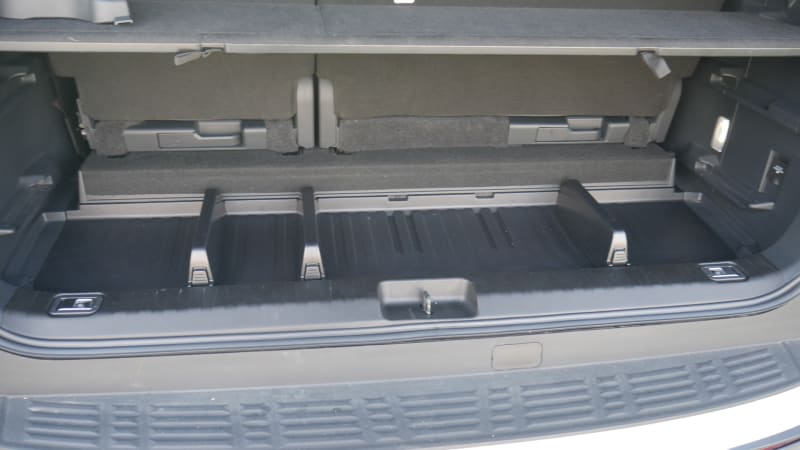 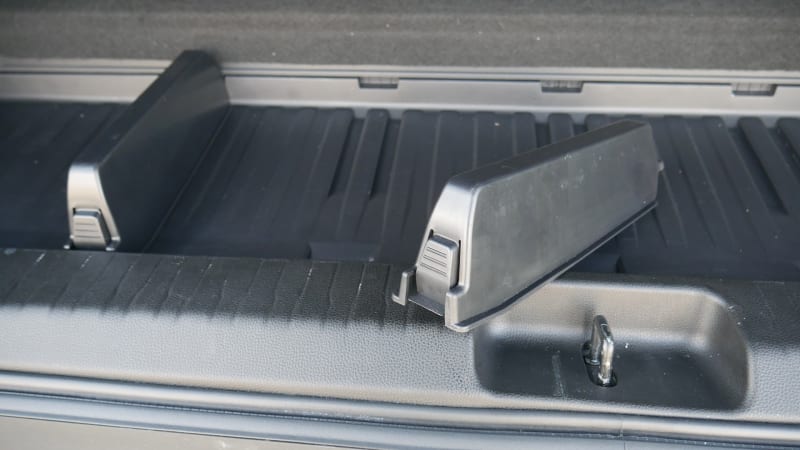 There are also three movable plastic dividers that slot into the, um, basement, to secure groceries and such. It’s a nice feature, actually.

To maximize space, I got rid of them, though. I also ejected the floor to free up a few precious centimeters of space I knew I’d need. All of the following luggage testing was done without this floor in place at the bottom. The bags sat on the plastic basement. 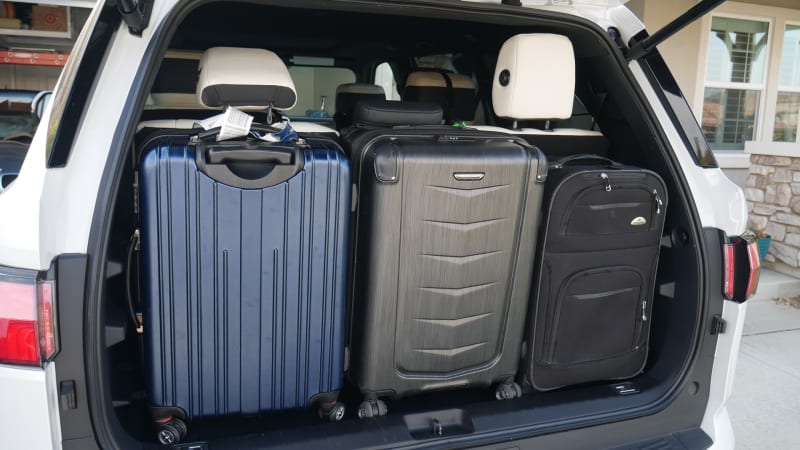 This is with the third row at its rearmost and the reclining seatback at an upright-yet-still-comfortable angle.

Can’t say I’ve come up with this Tetris formation before. This would be the three biggest bags, which is a helluva lot better than a Kia Sorento and a lot of other three-row crossovers. The Sequoia’s tall, boxy shape is the reason here, as it counteracts the cargo area’s minimal length by allowing the bags to stand up.

However! We are not comparing a Toyota Sequoia to a Kia Sorento. 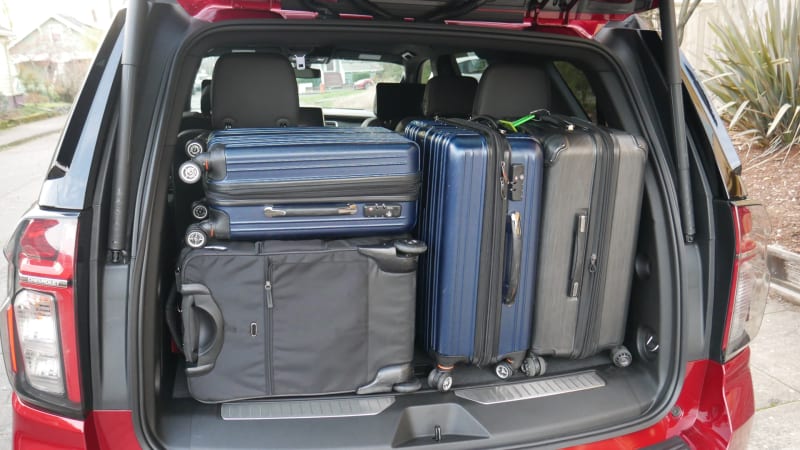 Chevy Tahoe: All bags but the smallest fancy bag. 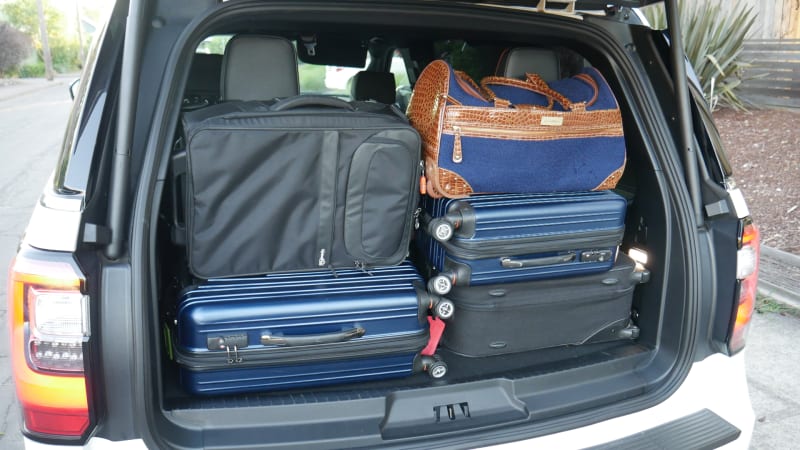 Ford Expedition: All bags but the largest check-in bag. 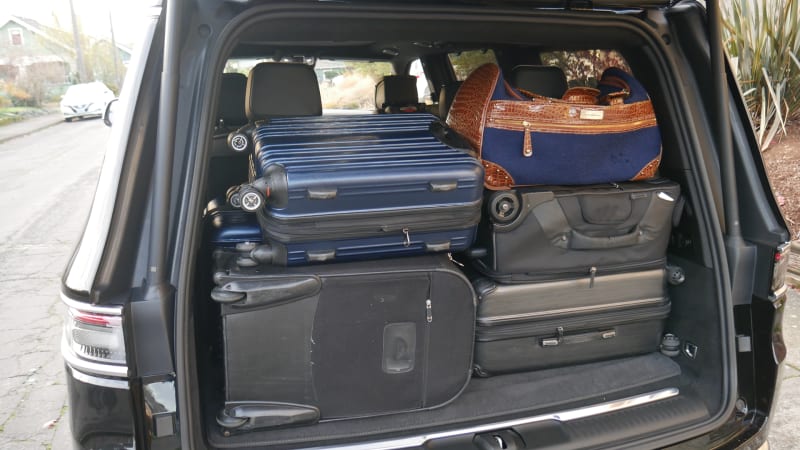 Jeep Wagoneer: All the bags 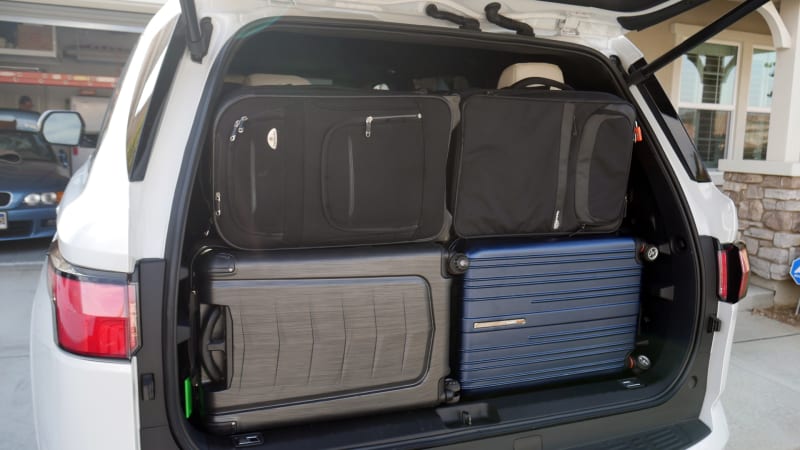 Now, here is the Sequoia with the third row scooted up as previously discussed. This would be the four biggest bags with the small roller and fancy bag left behind. This is comparable to a few bigger crossovers, but again, it relies upon the Sequoia’s tall height to make up for the lack of length … and therefore this weird lateral stacking arrangement. 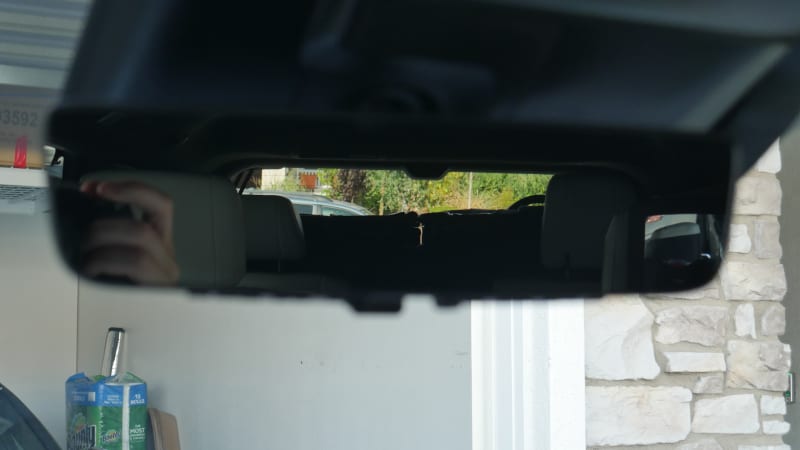 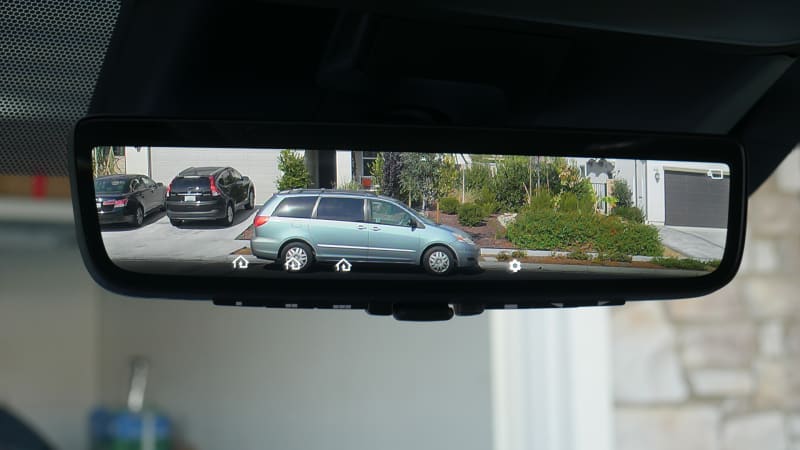 Despite how high this arrangement is, there’s no issue seeing out the back. Of course, this Tundra Capstone had the rearview camera mirror, which is great feature for this very reason.

Now, back to the bags. You could certainly slide the third row all the way forward, but then I’m not sure who could fit in it for very long. Or, perhaps, slide one side forward, slide one back, put one up, put one down … I don’t know, there are definitely possibilities. The third-row’s versatility is not in question. It’s just a shame that it’s effectively a workaround for an uncompetitive amount of standard space.

This is not the end of the story, however. Part of the problem while loading is the permanent “stage” that the third-row sits upon. It impedes loading bags behind the third row when it’s slid forward to any degree since it creates a weird double-tiered space. True, I could put the floor back inside at the same level as the stage, but then I’d be reducing overall height, which would therefore reduce the amount of bags possible. 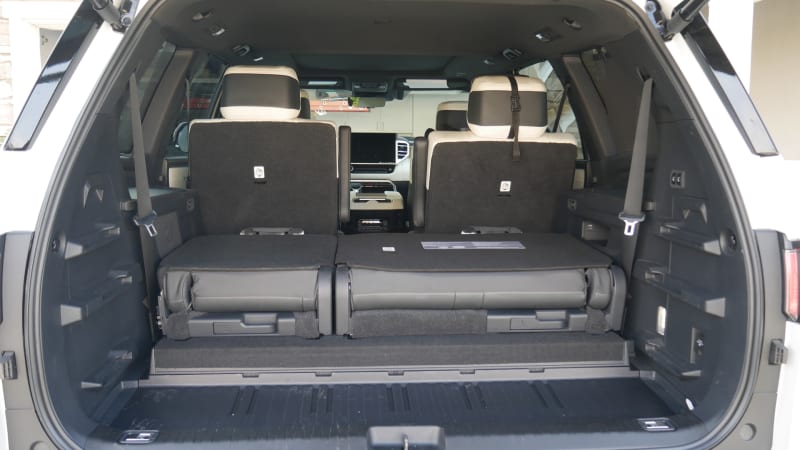 The third row does not fold flat into the floor as in the Expedition, Wagoneer and, since its full redesign, the Tahoe/Yukon. The Sequoia’s just sits atop that stage.

And note: The third-row seats are not removable, because Toyota says it wanted to maintain protection for what’s below: the hybrid battery pack. 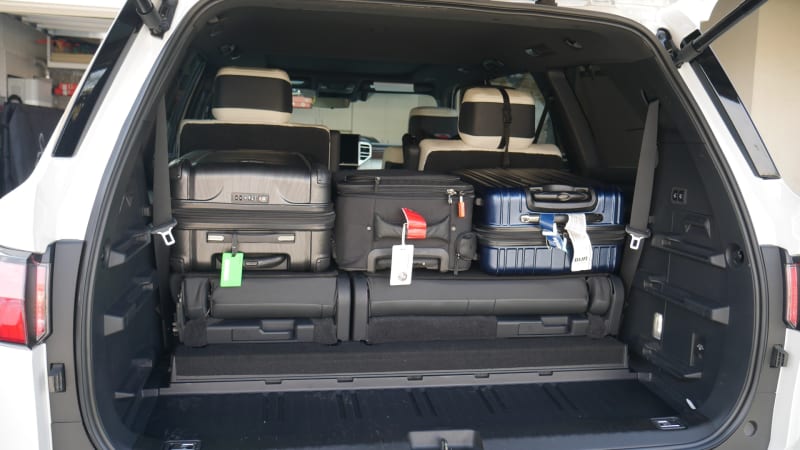 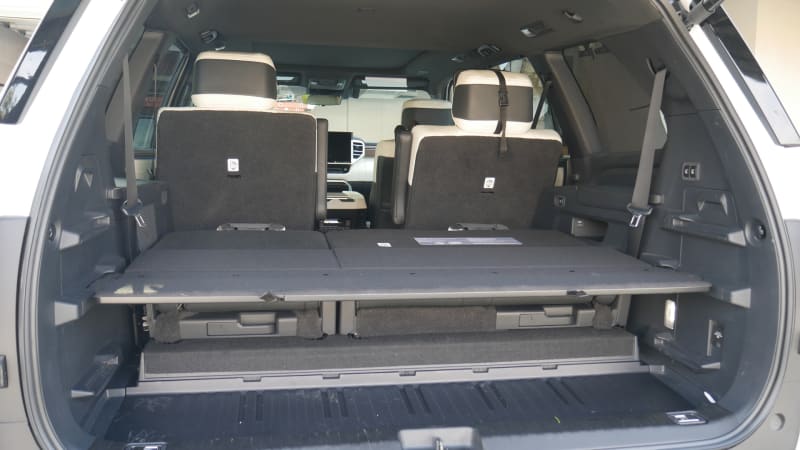 Above left, you can see what that looks like with bags.

Above right is with the floor in place to bridge the gap between the folded seatbacks and liftgate, thereby creating a contiguous floor with some storage underneath. 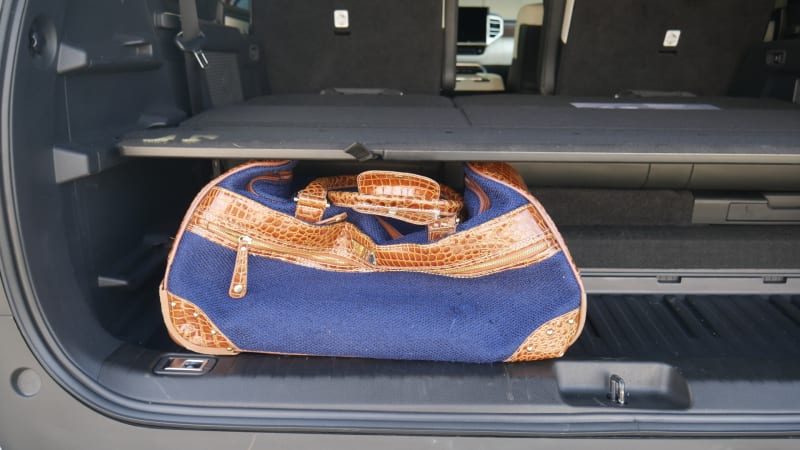 That space underneath is enough to fit a squished fancy bag. The smallest roller would not fit. 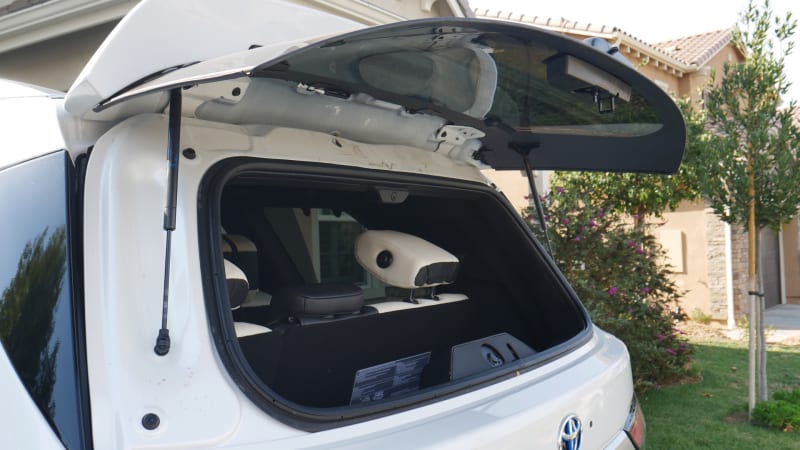 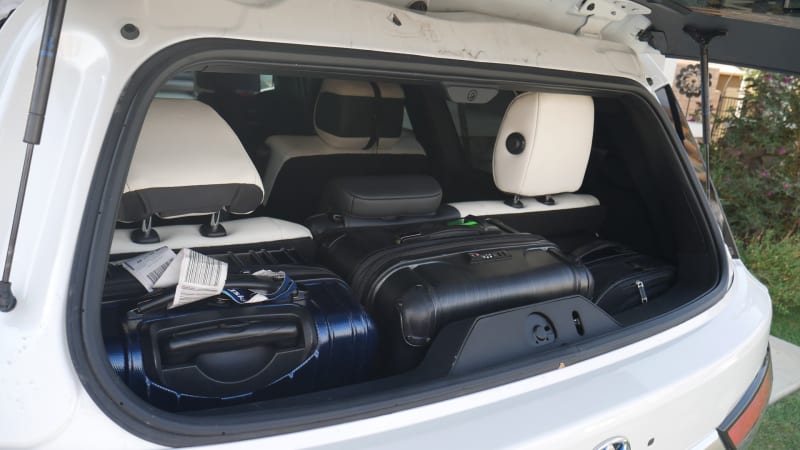 Moving on. Like the Expedition and Tahoe, the Sequoia has a pop-up window in its liftgate. This is definitely not a bad thing, but unfortunately, it means the Sequoia has lost the 4Runner-style power roll-down window it had for its first two generations (pictured below). You could drive around with it rolled down, which is great. This? Not recommended. 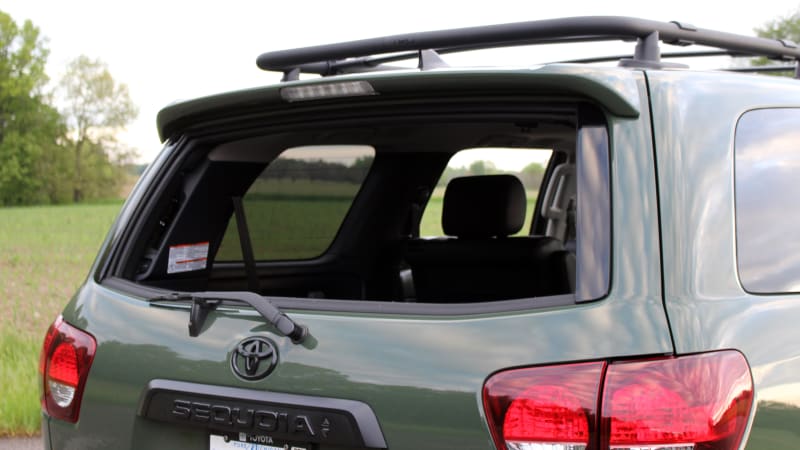 It should also be noted that the last-generation Sequoia did not have the third-row stage because it definitely was not a hybrid. It sure looks like there was more length behind the third row, too. 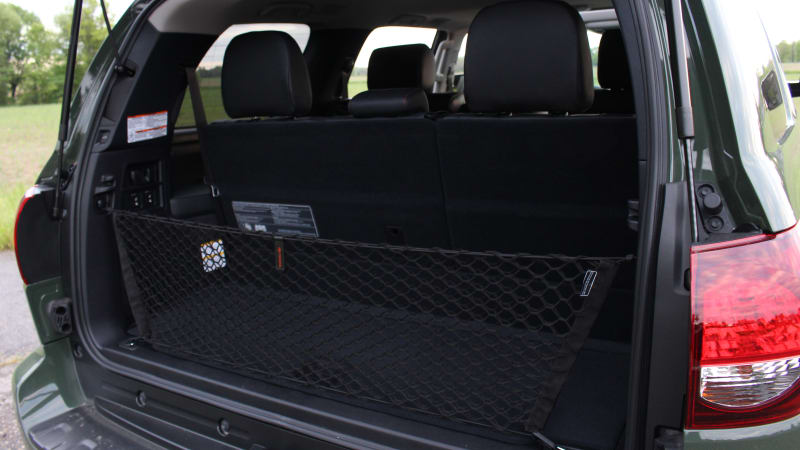 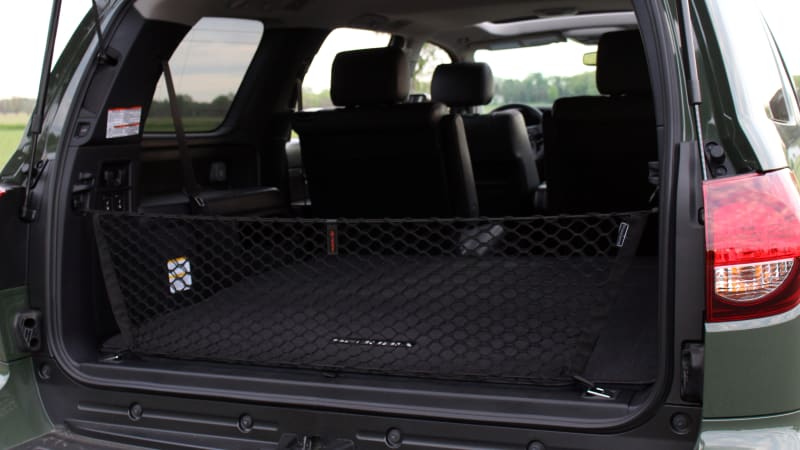 So yeah, while Toyota certainly went to great lengths to engineer clever workarounds, they are nevertheless workarounds. The new Sequoia has less cargo space than its predecessor, and far less space than its rivals. Add in its smaller passenger accommodations and you have a full-size SUV that in terms of interior packaging, just isn’t competitive.

Chrysler 300C returns for 2023 with SRT power and more

Chrysler 300C returns for 2023 with SRT power and more