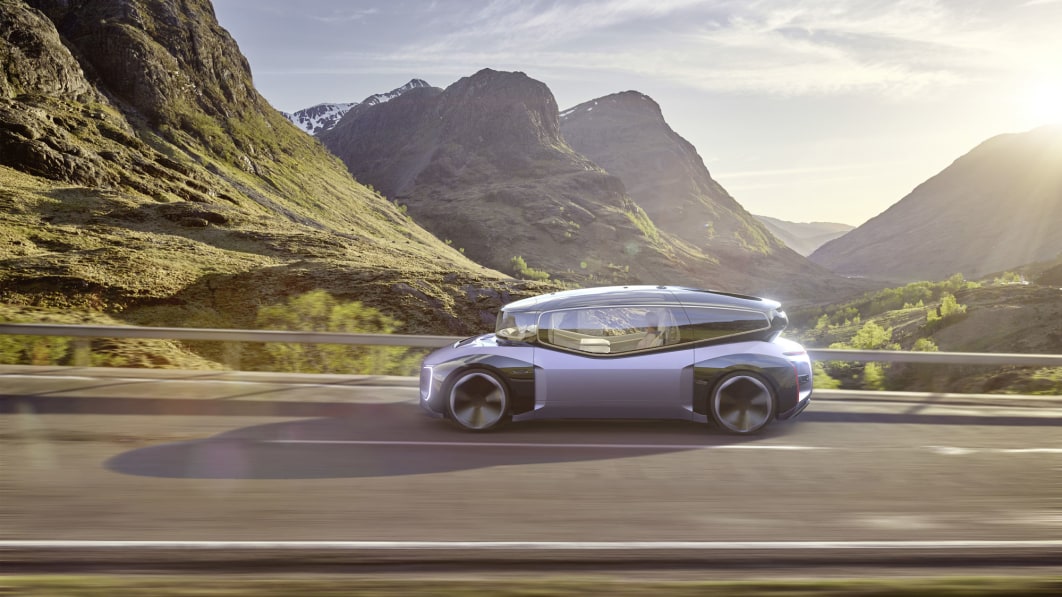 Volkswagen is looking ahead — way ahead — at the future of commuting. The company traveled to the Chantilly Arts & Elegance show taking place near Paris, France, to introduce an electric, van-like concept car that features Level 5 autonomous driving technology.

Whatever you think a Volkswagen should look like, this isn’t it. The concept breaks all ties with the company’s design language and instead adopts a highly futuristic look that would fit right in at the Consumer Electronics Show (CES). Tellingly, it’s not branded as a Volkswagen in the same sense as the GTI or the ID.Buzz; it wears “Volkswagen Group” emblems on both ends rather than the VW logo.

The exterior design is more functional than it might seem. For example, the window line is relatively low to give the occupants a clear view of the outside world when they’re sitting up, yet it’s high enough that the passengers can sleep without being disturbed by their surroundings.

Speaking of the cabin, wing-like doors swing up to reveal a lounge-like four-seater interior that users can configure in a number of different ways. If they’re traveling for business, they can turn the Gen.Travel into a conference room with two rows of seats facing each other and a table in the middle. Alternatively, two of the seats can fold into beds for overnight trips. Augmented-reality technology keeps kids entertained on-the-go, a restraint system keeps passengers safe even if they’re lying down, and the ambient lighting influences melatonin production.

Volkswagen didn’t have much to say about what’s under the sheet metal. All we know at this stage is that the Gen.Travel is fully electric and equipped with an active suspension system called Electric Active Body Control (eABC) that’s said to improve comfort. There’s no word yet on where the autonomous technology comes from, but Volkswagen is busily working on experimental autonomous vehicles with Argo AI.

Don’t expect to hail a Gen.Travel-like shuttle the next time you go to the airport. Volkswagen Group design boss Klaus Zyciora notes that the concept “offers use a glimpse of the travel of the future,” but nothing suggests that this van-sedan hybrid is headed to production in the near future. “As a research vehicle, the purpose of the Gen.Travel is to test the concept and new functionalities for customer response. Based on the study results, individual features may later be transferred to series vehicles,” Volkswagen explained in a statement.