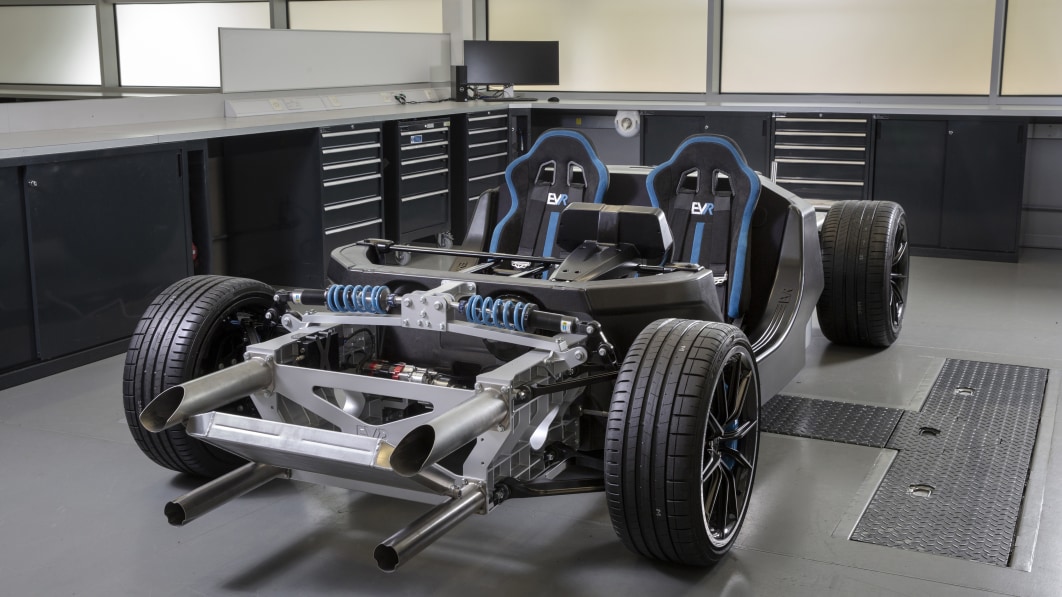 Deus announced its Vayanne electric hypercar earlier this year as conceived in Austria, designed in Italy, and electrified in the UK. That last bit refers to the battery-electric powertrain sourced from Williams Advanced Engineering (WAE), which we now have more information on. WAE took its new EVR turnkey electric vehicle platform to the Cenex Low Carbon Vehicle Show for a full reveal. Designed specifically for hypercars, the targets were versatility, lightness, power and speedy recharging. It appears the only fixed element for the time being is the 85-kWh battery set into a carbon housing between the wheels, and two motors. WAE says it can be refilled in less than 20 minutes, and powers a range of up to 279 miles. After that, OEMs and boutique makers can choose rear-wheel drive or all-wheel drive, hardtop or targa body styles, and road-legal or track-only configurations.

Peak output is 2,213 horsepower from the dual motors, explaining Deus’ publicized target of more than 2,200 horsepower for the Vayanne earlier this year. Depending on body style and aero, WAE believes the platform could push a hypercar to 248 miles per hour given an ideal form. We’re told it will be possible to build a finished product with such specs that weighs less than 3,637 pounds, carbon being used for everything from the pack enclosure to the double wishbone suspension. For comparison, the 640-hp Porsche 911 Turbo S weighs 3,636 pounds.

The list of in-house innovations on the EVR chassis includes a Scalable Battery Module that opens up flexibility for custom packs and sub-pack systems, controlled by battery management software that rationalizes the amount of electronics needed to run the powertrain. The company says each module has a capacity of 1.08 kWh at 50 volts maximum or 43 volts nominal, and an energy density greater than 240 Wh/kg. The individual cells are wrapped in carbon fiber, too, claimed to improve crash resistance. Battery cooling is run through the energy-absorbing side sills.

Theoretically, a purchaser could cut prototype development time to 12 months, and entire vehicle development time to 24 months. The Vayenne will provide the first test, Deus having said it will go into production in 2025. WAE has a hydrogen fuel cell version of the EVR on the way next.